The Hoka Clayton builds on the success of the wonderful Hoka Clifton. The Clifton is one of the best selling shoes, and I feel the Clayton is remarkably close in its function and design. Both shoes have stunning cushioning for their weight, with the Clayton coming in about an ounce lighter than the Clifton, but with slightly less cushioning. Using the RMAT foam as the outsole material works rather well, and I think the Clayton shows Hoka's growing maturity with this advanced material. Their initial attempts to make a shoe using RMAT for the midsole produced a heavy and hard shoe that seemed remarkably pointless to me. However, they found that RMAT has great grip on a wide variety of surfaces, and makes an outstanding outsole as it combines this grip with better cushioning than a traditional rubber and better wear characteristics than an exposed midsole. They've used RMAT to great effect on the Hoka Mafate and my favorite hiking boots, the Hoka Tor Ultra. When you run in the Clayton it feels a lot like the Clifton (both the first and second versions), though I found the upper to be slightly less comfortable. My main quibble with the Clayton is in the shape of the toe box, but this is a problem with virtually every running shoe on the market. I have some minor concerns with the way the midsole extends out from the outside edge of the forefoot, as noted below under "structure". The Clayton is rather pricy, so if you're after something with similar cushioning, for less money and with less weight then check out the Asics Gel Hyper Speed. Overall the Clayton is an outstanding shoe, and I've rated it as "The Best of the Best." (I use The Science of Running Shoes as the basis of how I test running shoes and what you should look for in a running shoe.)

I was surprised just how quickly my MilestonePod reached the 200 mile mark with that the Clayton. It's always a good sign when I don't realize how many miles I'm putting on a shoe, rather than having to force myself to wear a pair that I don't really enjoy. The RMAT outsole has stood up to the wear remarkably well, with not much more abrasion than you'd expect from a hard rubber outsole. The upper is quite thin with limited padding, but it never felt uncomfortable. I had to cut open the toe box early in my testing, as of the shape was crushing for my toes. With the toe box open, my toes were free to move naturally and my running was much better. The midsole has compressed, as you would expect over 200 miles. My measurements indicate that to the forefoot had compressed ~4 mm, and there is a slight indentation where the ball of my foot goes. By comparison, the heel has only compressed by ~1 mm. Personally, I suspect that this indentation under the ball of the foot is one of the better indications that a shoe is wearing out. As the cushioning under the ball of the foot collapses, it causes the foot to rotate inwards as you run.

This is the sole of the Clayton after 200 miles. The image has been heavily enhanced to highlight the texture and wear of the RMAT outsole. There is a little wear on the extreme back of the heal, and a little wear over the forefoot.

During the testing period I have also been running in the Hoka Tracer which appears to be a much narrower shoe. However, I realized that the two shoes are exactly the same in terms of the volume that holds your foot, and only differ in their midsole shape. The midsole in the Clayton extends outwards to the side of the shoe creating what I can only describe as a small "snowshoe effect". I also noticed that when running in the Tracer and the Clayton back to back I could feel the difference that this snowshoe effect made, as it creates extra twisting force on my ankle as the outside of my foot lands first. I took an electric knife to the midsole, and iteratively removed more and more of the midsole. I found this allowed me to run rather more naturally than the original shoe allowed. 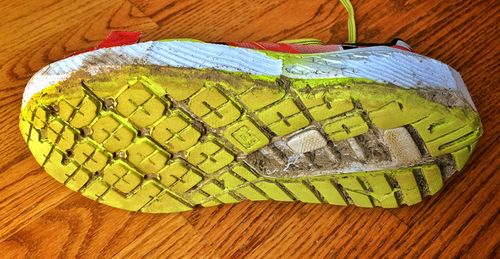 This is an enhanced image showing where I have trimmed the midsole to remove the "snowshoe effect."

4 Visualizing the Attributes of the Hoka Clayton 1