The Nike RN Distance 2 is not a bad shoe, and I expected to like it, but it had too many flaws. I dislike the booty style upper, the midsole that picks up stones like it's hungry for them, and a general lack of balance that leaves the shoe feeling dead underfoot. I rated it "Worth Considering", though I nearly ended up rating it "not recommended." (I use The Science of Running Shoes as the basis of how I test running shoes and what you should look for in a running shoe.)

Normally I wouldn't give an update until at least 200 miles, but I've really had enough of the shoe after just 100 miles. There's multiple factors behind my decision to give up on this shoe. I'm finding that as it picks up stones, the stones stretch the holes in the midsole, making it more and more likely to pick up future stones. Getting the stones out of the shoe is much tougher than any other shoe I've had, and you really need a screwdriver to pry them out. The raised midsole that forms a medial post is also annoying to me, and contributes to the sense that the shoe is a little dead underfoot. There is a surprisingly little in the way of signs of wear on the exposed midsole, and the upper looks new (except where I've cut the toe box open of course.) 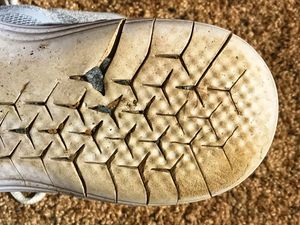 The buildup of stones after a long run. You can see some slight signs of wear in the midsole as well.