The EM Road N0 v2 is a lightweight, simple shoe that works well. It's not as good as the very best shoes, but it has no real flaws and I enjoy running in it. While the N0 is a little heavier than I'd like given its cushioning, some of the additional weight comes from having more padding in the upper, which may be worthwhile. The N0 is a remarkably natural shoe to run in, and could be compared to running barefoot on a cushioned track. It doesn't get in the way of your natural stride, and makes an excellent every day training shoe. I've rated it as "Highly Recommended". (I use The Science of Running Shoes as the basis of how I test running shoes and what you should look for in a running shoe.) 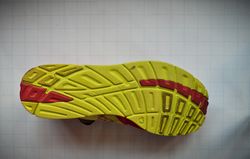 Pearl Izumi EM Road N0 showing the outsole more clearly where it has attracted more dirt. (This is the original version, but the update is identical.)

The v2 update is relatively minor, but the improvements are worthwhile. The shoe has become a little lighter while getting more cushioning, a nice achievement. I've enjoyed the v2 even more than the original shoe, with the notable exception of the laces that seem to delight in coming undone me to run.

The Asics Gel Hyper Speed is one of my favorite shoes, and it shows up the weaknesses in the N0. While the N0 is a good shoe, it's not as light or as well cushioned as the Hyper Speed. The N0 is better padded, but I've never felt the difference in comfort in practice.

The N0 is reasonably light weight, but the New Balance RC5000 is quite stunningly light. The RC5000 is less than half the weight of the N0, but nearly as well cushioned. Of course, the bare bones RC5000 is not for everyone as it provides just enough cushioning to improve Running Economy, but no more. This makes it the most efficient shoe I've found, but the minimal cushioning my not be sufficient for you. However, if that's a problem for you, then the N0 may not provide the cushioning you want either. (Note that the updated New Balance RC5000v2 is slightly heavier than the original, but much better cushioned.)

I tend to compare shoes against my benchmark "normal running shoe", the Asics GT 2000. The GT 2000 weights nearly twice as much as the N0, but most of that extra weight is in the form of over engineered features that The Science of Running Shoes indicate are more likely to cause problems than solve. There's quite a bit more cushioning with the GT 2000, as well as somewhat better padding in the upper. However, the N0 won't attempt to interfere with your stride, or encourage you to heel strike like the GT 2000. The GT 2000 helps show just how good the N0 is; it's just not quite as good as the best shoes.

4 Visualizing the Attributes of the Pearl Izumi EM Road N0