My initial happiness with the Lyte 33 turned to disappointment as its flawed forefoot started to cause problems. As noted under 'structure' below, the Lyte 33 is likely to cause blisters or undue stress under the forefoot, which is a real shame. Other than this problem, the Lyte 33 is a really likeable shoe. Its shape is closer to fitting the human foot than many shoes, it's flexible, has a nice upper and the cushioning is soft (where it's not digging in). If Asics could address this problem without creating new issues, the next version could be a great shoe. For now, I'd suggest avoiding version 3 and it's rated as "Not recommended." (I use The Science of Running Shoes as the basis of how I test running shoes and what you should look for in a running shoe.) 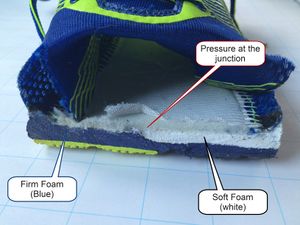 A slice through the Lyte 33 showing the problem in the forefoot.

3 Visualizing the Attributes of the Asics Gel Lyte 33

The Lyte 33 is a nice shoe, and if it weren't for the flawed forefoot cushioning, it would be worth considering instead of the Asics Gel Hyper Speed. The Lyte 33 is nearly 25% heavier, but not quite as well cushioned as the Hyper Speed. However, its better shape and nice upper could have redeemed it. You can only really consider the Lyte 33 if you're not running far enough for the forefoot problems to annoy you.

Compared with many shoes, the Lyte 33 is lightweight, but it's more than twice as heavy as the New Balance RC5000. The Lyte 33 has more cushioning, but given the forefoot problems, I'd rather do a marathon in the RC5000 than the Lyte 33.

I tend to compare shoes against my benchmark "normal running shoe", the Asics GT 2000. Even in this comparison, the Lyte 33 is still let down by its forefoot hotspot. I'd have a hard time choosing between the two shoes; the GT 2000 feels like a clog compared with the Lyte 33, but the Lyte 33 would give me forefoot problems over any distance.