Running shoes frequently surprise me, and normally not in a good way. The Solstice is that rare exception when I have low expectations but find myself pleasantly surprised. Altra market the Solstice for "everyday wear or shorter road races", and they seem to think of it as an "entry level" shoe. My initial impressions were suitably underwhelming, as the Solstice is not terribly light, or unusually well cushioned, and it doesn't have any remarkable features. Nothing remarkable that is, until I started putting some miles on them, and discovered just how much my feet liked them. Unlike some shoes, where I have to push myself to put the miles in with them, I found myself automatically reaching for the Solstice. And when I tested other shoes, I found myself missing the Solstice. While the solstice is not ultralight like the long gone New Balance RC5000‏‎, or massively cushioned like the Hoka Clifton, or amazingly fast like the Nike Vaporfly 4%, it is remarkably comfortable. Like all Altra shoes, it's near zero drop, and has an outline shape that matches a healthy human foot. Unlike most Altra shoes, the Solstice has a reasonable amount of headroom for the toes, allowing for a more natural foot movement. I was surprised to find myself packing of the Solstice for a vacation instead of my venerable Nike Zoom Streak LT 3, which have been my companion on every vacation for the last few years. I'm rating the Solstice as "Highly Recommended", and I hope you enjoy your running in them as much as I am. (I use The Science of Running Shoes as the basis of how I test running shoes and what you should look for in a running shoe.)

As you can see from the images above, there's surprisingly little abrasion on the exposed midsole after 200 miles. Typically, I'm gentle on my shoes, partly due to my weight (140Lb/64Kg) and partly a soft foot strike. As with most shoes, the limiting factor is more the compression of the foam than abrasion, but after 200 miles the compression is fairly modest. Most of the compression is actually the insole rather than the midsole, so if you can find some decent Replacement Insoles, they could prolong the life of the Solstice. 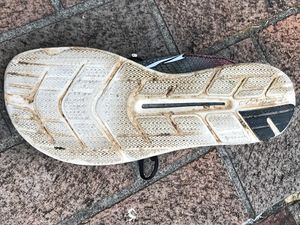 After 400 miles the Solstice is still going strong. There's still relatively little abrasion on the exposed midsole as you can see from the image above. There's some compression on the midsole, but far less than I'd have expected. The insole has continued to collapse, but ironically now that more of the insole is flat, it causes less problems. Instead of being compressed under just the ball of my foot, it's compressed over most of the forefoot, so there's not the twisting forces anymore. The Solstice has become my "go to" road running shoe, and the more I run in it, the more I appreciate it. I occasionally get caught out by the laces coming undone, which can be really annoying, but that's about my only quibble.

I really wasn't expecting the Solstice to last anything like this long. There is now some noticeable abrasion on the sole, mostly under the middle of the forefoot. There's a little bit of abrasion on the outside edge of the heel, and most of my shoes have more wear in this area. This leads me to suspect that I'm running a little more efficiently in the Solstice and some of the shoes. There is a far less compression of the midsole than I would expect, something I confirmed by comparing with a new pair of Solstices. The new shoes are quite a bit firmer, showing how the foam has become more compliant with use. While there's quite a bit of compression under the ball of the foot, most of this is in the insole rather than the midsole. The Solstice is now borderline for continued use, but I may continue to put more miles on them as the opportunity arises.