The Adidas Adios has a new material in the midsole (see 'Adidas Boost Foam' below) which has more spring and lasts longer than conventional foam. However, unlike the Adidas Energy Boost, the Adios is thinner and lacks the immediate comfort of the Energy. The Adios is a traditional design, with the heel raised 11mm above the forefoot, more than the Asics GT 2000, a shoe I consider the epitome of traditional shoe design. The Adios confirms the potential of the Boost foam, if only Adidas could design a descent shoe around it. I've rated the Adios as "worth considering." (I use The Science of Running Shoes as the basis of how I test running shoes and what you should look for in a running shoe.)

3 Visualizing the Attributes of the Adidas Adios Boost

The Adios uses a new type of foam in the sole that has more bounce and is more resilient. Adidas demonstrates this extra bounce by dropping a steel ball on their new foam and EVA, the industry standard foam. Because of the extra energy return in their new foam the ball will bounce much higher than on EVA. However, when we run our feet do not bounce off the ground, but have a short period of sustained contact, often called the 'stance phase'. So when your foot lands, it seems that the boost foam would return the landing shock back up your leg rather than absorbing it, which is less than ideal. It would be good to see a study that looks at how the boost foam changes the stresses on knees and hips compared with a standard running shoe. Regardless of how the bounce impacts your running, the increased lifespan of the new foam is appealing. Having a shoe that lasts longer is obviously good, but Adidas also claim that the new foam is more consistent through most of its lifespan, rather than gradually decaying in the way EVA does. Adidas also claims that their new foam does not change characteristics in extreme temperatures like EVA does. 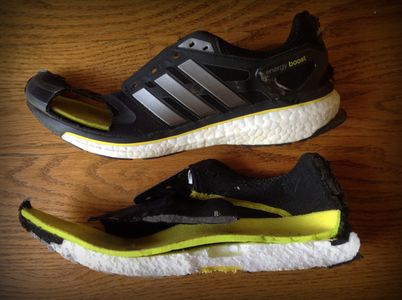 Adidas Adios Boost. The foam used in this shoe looks a little like Styrofoam/polystyrene, but it's actually remarkably tough to cut. You can also see a small indent in the top of the midsole where the foot pod would go.