What to Look for in Running Shoes

My running shoe reviews are based around my personal experience and my interpretation of The Science of Running Shoes. I believe that a good running shoe should not interfere with your natural biomechanics, so shoes with raised heels (drop) or anti-pronation features are a bad idea. A running shoe is a trade-off between weight, cushioning, and longevity, and different runners will want to make different trade-offs, so I cover shoes that vary in their characteristics, with the best shoes offering the most cushioning for their weight, from the light & minimalist shoes up to the heavier Maximalist shoes. I also believe that a good running shoe should match the shape of the human foot, without binding the toes.

Very few shoes have a shape that mirrors the human foot. It often seems like shoe companies have never seen a human foot before given the strange shape they make their shoes. This is especially true of Hoka, which have a particularly small toe box. The main company with shoes for the human foot is Altra, and once you've tried their shoes the traditional shoe shape seems even more bizarre. (The Mizuno Cursoris is a notable exception that also has a nice toe box shape.) 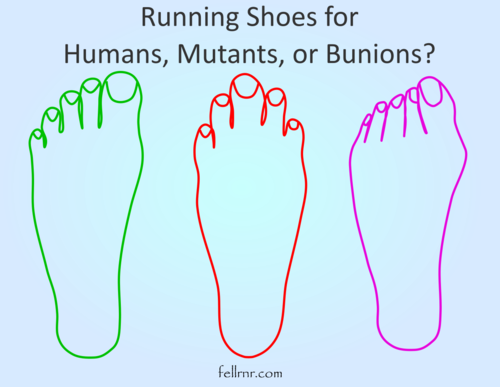 A light hearted look at how other shoe makers seem to be designing for a strange shaped foot.

To achieve a light weight with maximum cushioning, many shoes don't use a hard rubber outsole over the softer midsole. This can result in uneven wear patterns when the midsole erodes away from around the patches of outsole. In the image below, the red arrows mark the soft midsole and the blue arrows mark the hard outsole, with the green arrow indicating an intermediate toughness material. 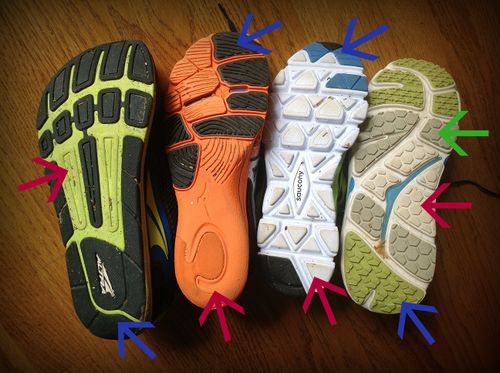 From left to right is the Torin, the Cursoris, the Virrata and the Bondi B.
Retrieved from "http://fellrnr.com/mediawiki/index.php?title=What_to_Look_for_in_Running_Shoes&oldid=11988"