The original Endorphin is an outstanding running shoe, providing a surprising level of cushioning at an ultralight weight. I had incredibly high hopes for this second generation, with reports of improved cushioning and only slight weight gain. The forefoot was also changed to use TPU foam, which can be far more resilient and long-lasting, as well as provide rather more bounce than traditional EVA foam which is still used in the rear of the shoe. Sadly, while the reports of the weight gain were true, the cushioning is actually quite a lot worse than of the original shoe. My initial runs in the endorphin 2 were a little slower than I'd have expected, and the shoe didn't feel cushioned enough to give me improved Running Economy you can get with modest cushioning. My initial impressions of this being more of a minimalist rather than optimal running shoe were confirmed by some later calculations of the shoes measured cushioning. I've rated the endorphin to as "worth considering", as I think there are far better light weight running shoes on the market, including its predecessor. You can read my review of the original at Saucony Endorphin 1. (I use The Science of Running Shoes as the basis of how I test running shoes and what you should look for in a running shoe.)

I don't normally comment on the fit of running shoes, as everybody's foot is a slightly different shape. However, I found that the Endorphin 2 has a rather unusual shape. I've found the key to getting a shoe that fits well is to ensure that the curve on each side of the forefoot matches the curves of the shoe. If you look at the photo below, the point marked by the blue arrows and red arrows should line up, so that the bulge to the inside of the ball of the foot matches the on the shoe, and likewise on the outside. With the Endorphin 2, I found that when I had a ideal fit from the ball of my foot back, the toe box was radically too small. While a misshapen toe box is endemic to running shoes, and I typically can't the toe box open, the Endorphin 2 is far worse, being too narrow and too short. 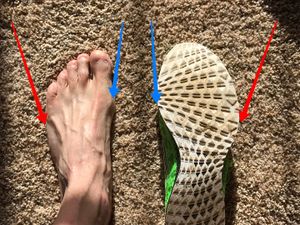