The Vanish-R is arguably Altra's first "racing flat", coming in at just 5.3oz in my US men's 10. This is light, but not stunningly light these days. Material science has allowed for the creation of some stunningly light and effective running shoes. The Vanish-R has lots of promise, but it has a few significant flaws, so it doesn't quite match up to the best of breed. The most obvious issue is the fit; the Vanish-R comes with two insoles, and with both insoles installed the shoe is rather too low in volume. However, with just one insole, the volume becomes too large and I had problems with the ankle opening rubbing on my heel bone. The cushioning with just one insole is also a little more minimalist than I'd like. The second problem is the lack of head room in the toe box, with the toes pressed flat. This is uncomfortable, and I fear it prevents the toes risking up to strengthen the arch (AKA "the windlass effect"). This is a problem to one extent or another in virtually every shoe, but it's particularly bad on the Vanish-R. The final issue is that the Vanish-R lacks durability. I retired mine after only 135 miles, mostly due to the compression of the cushioning. Having said all that, the Vanish-R is still "recommended; it's got good cushioning for its weight and I enjoyed running in it (with the toe box cut open as I usually do.) Sadly, the Vanish-R suffers greatly by comparison with the Nike Zoom Streak LT, which is almost exactly the same weight and cushioning, but the Streak is more comfortable and lasts far, far longer. (I use The Science of Running Shoes as the basis of how I test running shoes and what you should look for in a running shoe.) 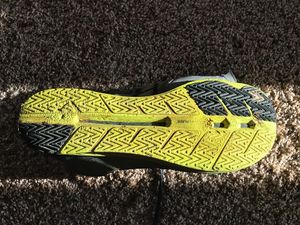 As you can see from the image above, there's some abrasion of the exposed midsole after 135 miles. I'm generally a low abrasion runner, so I'd expect most people to see more than this. The abrasion is fairly minor at this point, but it's rather uneven, wearing in the middle of the forefoot far more than the areas around. I suspect this is due to the cut outs in the middle of the forefoot which will concentrate pressure in this area. As with most shoes, the limiting factor is more the compression of the foam than abrasion. Because the Vanish-R relies more on the insoles for cushioning that most shoes, this is somewhat exacerbated, as insoles tend to be far less durable than the midsole. I found that after 135 miles the Vanish-R has compressed under the ball of the foot more than I'd like. I think I could push it out to nearer 200 miles, but I'm looking to protect my knees at this point, so I'm retiring them. As a comparison point, the Vanish-R has more of the uneven compression at 135 miles than my Nike Zoom Streak LT have after hundreds of miles. (I retired my Streak LT after 300 miles, then used them again for several weeks, retired them, then repeated the return-retire cycle several more times. I've no idea how many miles they have on them at this point.)