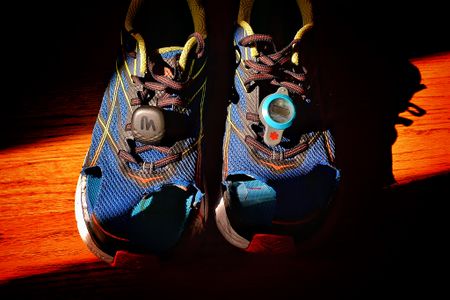 The MilestonePod V2 on the right and V3 on the left.

The MilestonePod is a simple way of tracking the mileage of your shoes, but it's also a Running Sensor that will gather data on your Running Form. I think the MilestonePod is well worth the price even if it only tracked overall mileage for your shoes. Given the extra data it records, it's a real bargain. MilestonePod $29.95 USD at Amazon.com.

There are a number of limitations to the MilestonePod, though it should be noted that similar limitations occur in Running Sensors costing many times as much.

Some of these limitations could be resolved in future firmware updates, but I don't have any insight into this.

I've tested a number of the metrics for the Milestone Pod, and I'll continue testing against other systems.

4 The Differences from V2 to V3

MilestonePod has upgraded their system from V2 to V3. The primary difference is that the V2 has a small LCD display that shows the total miles recorded for that shoe, which the V3 lacks. This lack of display should increase the battery life in the V3. I've found the V2 lasts for a few hundred miles, but I've not exhausted a V3 battery yet to know how long it will last. The other difference is that the V2 requires you to unlace your shoes to attach it, where the V3 allows it to be attached via a simple clip. The metrics from the two versions line up nicely based on my informal testing. You can still get the V2 at Amazon, though I'm not sure for how long MilestonePod V2 $. (used) at Amazon.com.

RunScribe is a much more expensive and more sophisticated device that has quite different capabilities. I highly recommend both devices, as they fulfill different purposes. I generally consider RunScribe to be a 'running lab' which I use on occasional runs to see how different equipment or running form changes the metrics. The MilestonePod is something I can use on every run without any hassle, so it tracks my shoe mileage and gives me insight into the broad changes in running form over time.

A crude analogy here would be to compare them to a GPS watch and a measuring wheel. The GPS watch you can use every day to see how far you've gone, but if you want to certify a course, you need something vastly more precise.