The Altra Olympus has the soft cushioning that is similar to the Hoka range, combined with zero drop and a nice wide toe box. It's remarkably flexible given its cushioning, with an outsole that works well on the road. Like the Hokas, the cushioning means the shoe works well on stony trails as well. Like other Altra shoes, the tongue area is wider than most shoes, reducing the pressure slightly on the top of your foot. Unfortunately, the Olympus is nearly as heavy as the Hoka Mafate, but the Mafate is better ate earning its weight, with a lot more cushioning and an outsole that works in nearly every terrain. While the Olympus might pretend to be a trail shoe, it won't handle the soft mud or slick rock in the way the Mafate will. For an even more stark comparison, the Hoka Clifton is much lighter while providing even more cushioning. I've rated it as "Highly Recommended." (I use The Science of Running Shoes as the basis of how I test running shoes and what you should look for in a running shoe.)

3 Visualizing the Attributes of the Altra Olympus

Comparing the Olympus and the Hoka Clifton, the Clifton wins on light weight and superior cushioning.

Comparing the Olympus and the Altra Paradigm, the Paradigm wins on weight: 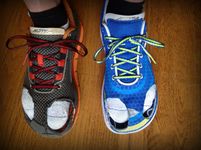 Comparing the Olympus and the Hoka Bondi, the Bondi has slightly more cushioning and is lighter weight. If you're after shape and comfort, choose the Olympus, but if you want lightweight cushioning, choose the Clifton over either.

6 A Comparison with other Recommended Shoes