A review and comparison of Hoka One One running shoes

The Hoka shoes started the 'maximum cushioning, minimum drop' style of shoe with their thick, softly cushioned soles. They reduce the pounding on the soles of your feet, but they are not without their downsides. The Hoka Clifton is one of the most impressive shoes I've come across recently, with remarkable levels of cushioning at a light weight. I've included some recommendations to help you evaluate if Hokas are right for you.

Hoka One One, pronounced "Hoka O-nay O-nay", means "now it is time to fly" in Maori. These shoes have midsoles that are much thicker and softer than traditional shoes. The soles are also wider to prevent the higher soles making the shoes unstable, like stilts. However, the sole is not as thick as it appears from the outside, as you can see from the image below. The foam in the midsole comes up the sides of the shoe much higher. <gallery widths=300px heights=300px class="center"> File:HokaHalfs.JPG|The Hoka Bondi cut in half, showing the outside and inside views. You can see that the midsole foam is a lot higher on the outside than the inside. File:ShoeHalfs.JPG|This image compares the Hokas with other shoes. File:HokaRocker.jpg|Here the outline of the foam midsole has been highlighted in red. This helps reveal how the Hoka midsole narrows at the front and back to create a 'rocker' effect, making it easier for your foot to roll. File:HokaOlympusSlice.JPG|A comparison between the Altra Olympus and Bondi. You can see the difference in the way the midsole tapers towards the front of the shoe. </gallary> 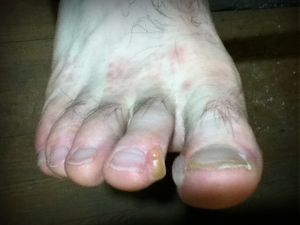 An image of a runner with the distinctive Hoka blister pattern I saw at the 2013 Umstead 100.

I've seen a distinctive pattern of blisters associated with the Hokas, where the blister forms part way along the toes, normally between the big toe and the next toe along, and sometimes between the little toe and its neighbor. I saw a disproportionate number of Hoka wearing runners with this blister pattern at the Umstead 100. This can be avoided by cutting open the toe box, but far too few people do this.

My recommendation depends on what type of runner you are.

The numbers in the decision chart above correspond to the notes below:

I'd suggest getting your shoes from somewhere with free shipping both ways, like http://zappos.com, who also have one of the best selections of Hoka shoes I've found. http://www.roadrunnersports.com has the advantage of letting you run in shoes and still return them for an exchange, but the return shipping is not free. 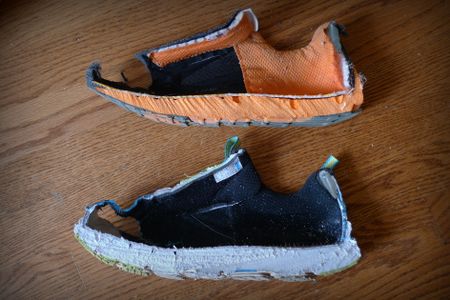 A comparison between the Altra Olympus and Hokas.

While Hoka was the first company to produce the Maximalist style of shoe, but Altra has started to produce comparable shoes. The Altra key selling points are zero drop (no high heel) and a shape that matches the human foot. Initially the Altra shoes were minimalist, with thin, firm midsoles, but they have introduced some thicker, softly cushioned shoes such as the Altra Olympus. At the same time, Hoka has moved to thinner, firmer shoes such as the Rapi Nui, Conquest or huaka. I've run in both Hoka and Altra shoes, even swapping between them during 100 miles races. As you can see from the picture of the dissected shoes above, the shoes are quite similar, but the Hoka has a much more abrupt taper of the midsole at the front of the shoe. By comparison the Altra tapers more gradually from further back. I find the Altra a better Maximalist shoe than the Hoka range, but things may change as each manufacturer evolves (or devolves) their product range. 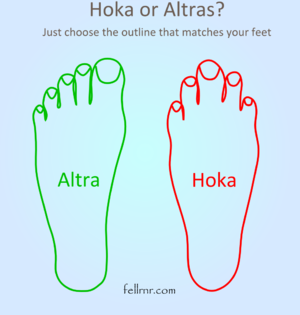 A tongue-in-cheek look at the different shapes of the Hoka and Altra shoes. 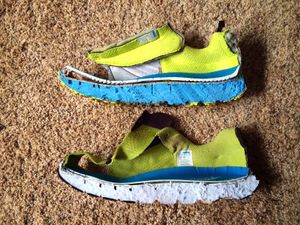 The Hoka Stinson above, which has a late meta-rocker with the Hoka Clifton that has an early meta-rocker. If you look at the front of the midsoles, you can see the blue foam of the Stinson tapers rapidly and more extremely.

Hoka have started to use a new type of foam called RMAT that lasts much longer than traditional EVA foam, but it's heavier and much firmer. The result is a shoe that looks like the usual Hoka, but is far too firm. You can find shoes weighting the same that are vastly softer, or shoes that are similar in cushioning that are vastly lighter. I avoid any Hoka that uses RMAT in the midsole, but RMAT can also be used in the outsole, where it can provide remarkable grip on pretty much any surface. (Some of the Hoka range are only available through specialty running stores, while others are targeted at large chains like sporting goods stores or department stores.)

10 A Comparison with other Recommended Shoes