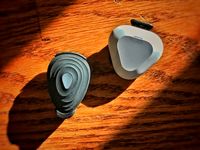 Two Running Sensors that estimate running power, the Stryd on the left and SHFT on the right.

I've tested many of the running power meters that are currently on the market. While some of them are remarkably useless, some of them can provide value as long as you understand the limitations.

Here are the primary limitations of running power meters, and different sections of this article will go into more detail on some of them.

There's an old saying that " all models are wrong, but some models are useful." So, while running power meters can't measure your power output, they can still be useful. It's possible for a running power meter to estimate how an incline or decline changes exercise intensity for a given pace. This can allow for more even pacing on hilly courses, which gives a more even effort when training. More importantly, it can allow for more even pacing on a hilly race, which would be great for things like the Boston Marathon. This could be more effective than Heart Rate, which suffers from a significant lag between changes in intensity and a change in Heart Rate, as well as Heart Rate Drift. A running power meter can also be useful when doing uphill interval training, where they can provide some insight into the effort required compared with level ground.

I've tested a number of running power meters, and they vary vastly in the usefulness.

So far, only RunScribe has been transparent about the model they use for running power, which is available as an online calculator at RunScribe.com. Your power output is going to be closely related to your Running Economy, and there's quite a bit known about The Science of Running Economy. The three most important inputs to the model are:

There are some other possible inputs, but they appear to be tricky to implement at best.

Most of that power output is not running power, but goes to generate heat and do other things superfluous to running like keeping my brain working.

The conversion factors used above also only work if you are burning carbohydrate, as fat burning requires significantly more oxygen. It would be wonderful to gain insight into the mixture of fuels that an athlete is burning, but so far, the only way of doing that is to measure the ratio of oxygen consumed to carbon dioxide produced.

6.4 Comparisons Between Running Power and V̇O2max

Below is a graph from the book "The Secret Of Running", which compares power output and V̇O2. It's claiming that this shows "the stride data I just as good as the V̇O2." However, this only shows that the Stryd estimate of power varies linearly with pace, which given pace is a primary input to power estimate should come as no surprise. It also shows that oxygen consumption is also linear with pace, something that is well known. However, the power estimate for a given oxygen consumption varies dramatically. You can see for 40 ml/Kg/min, the estimate varies from 2.5 w/Kg to 4.0 w/Kg, a nearly 40% variation. See hetgeheimvanhardlopen.nl for more details. 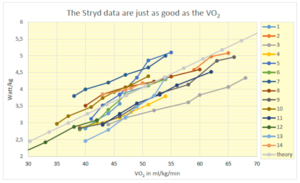 Data from "The Secret Of Running" book.

Stryd have released their own evaluation at Stryd Metric Validation. Their data shows "Stryd power is 96% correlated with metabolic energy expenditure", but the study was on 13 runners and the correlation is only a subset of 9 of them. 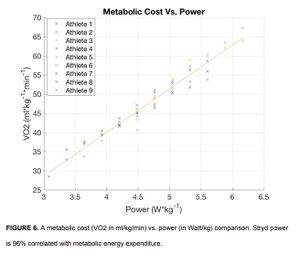 Data from an evaluation performed by Stryd.

Power meters have become an integral part of training for cyclists, and a number of running Running Sensors claim to have similar benefits for runners. Let's look at the differences between power for cycling and running.

Garmin claim that for a given oxygen consumption, the Watts of running output should be higher than watts of cycling[1]. Thankfully, Garmin list the scientific research they use to support their claim, allowing for their conclusions to be verified.

None of this research appears to be relevant to real-world running, or helpful in calculating appropriate running power.