All models are wrong 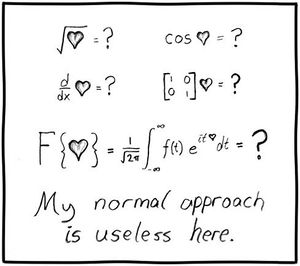 Of course some things can't be modeled, such as love. (Some insight, inspiration and humor from http://xkcd.com/55/)

George Box once said "all models are wrong, but some are useful." The nature of the model is that it is an approximation of the real world. Real-world situations are often too complex to adequately model in a way that is useful. In many ways it is the simplicity of the models we create give them their value. They allow us to look at a relatively small manageable number of inputs and produce an output which has some real-world applicability. An example on this website would be the VDOT Calculator, which predicts one race time from another race time at a different distance. In reality, the actual performance in any given race is based on a vast array of variables, many such as the weather that cannot be predicted. However, I would argue that the VDOT Calculator is useful because it gives is an approximation of our race times. Without that approximation you will be hard to know what pace to aim for without having run the distance several times. Many of the models on this website attempt to focus on the usefulness, while trying to disclose their limitations.