Garmin's Connect IQ allows for the creation of apps to run on Garmin's running watches in much the same way you can run apps on Android or and iPhone. This makes the newer Garmin running watches as revolutionary as the first iPhone. Before Apple introduced the iPhone, a smart phone was largely limited to the functionality that was provided by the manufacturer. Now there is a huge portfolio of applications that allow the iPhone to be used in new and novel ways. So far, we've seen a huge explosion in the number of apps available for Garmin watches, and this has dramatically improved the functionality, especially in the lower end watches like the Garmin Vivoactive that were a little crippled out of the box. It's not reached the point where seeing with smart phones, where they are primarily a platform for the apps with the phone functionality as a secondary feature, but it's not inconceivable that this might happen to running watches.

There are a few watch faces that I've come to really love. The first two provide a graphical display of your activity over the last week. This allows you to see how your training is progressing at a glance, and can provide some additional inspiration to keep you moving.

There are a lot of great data fields out there, so I will mention just a couple of highlights.

I've not found any compelling watch apps so far. In the early days of Connect IQ there were a number of watch apps created because that was the only way of recording additional data. With later releases of Connect IQ, a data field can record additional data, so these apps are no longer needed. You can see this with Stryd, which was initially released as an app, but now you're better off with the Stryd data field. To me, the watch app that embodies the potential of this approach is "dwMap" by mappicus. This watch pants the functionality of following preloaded course is to the more basic watches like the Garmin Vivoactive. 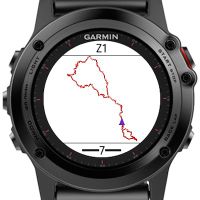 The dwMap watch app on the Vivoactive.

So far, widgets have been even less impressive than watch apps. There are some limitations on what data the widgets can access, which may be why they're not as innovative as I'd have hoped. For instance, a widget can't get a list of all of your activities to evaluate your training history. Let me know if you've found a widget that you'd recommend. 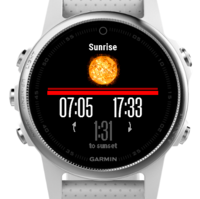 This app shows sunrise and sunset times, which is nice, but the data is available on the Connect IQ watch faces I use.

Garmin are continuing to actively develop Connect IQ and expand its capabilities. There are a few limitations that have annoyed me and I feel are worth mentioning.

While Suunto supports downloadable "apps", this should not be confused with Connect IQ. Without going into the technical details, Suunto supports simple scripts where Connect IQ is a full development environment. An analogy would be the difference between a programmable calculator and a PC. You can do some interesting things with a programmable calculator, but nothing like the things you can do with a PC.