Garmin's Running Power Meter is a software download for their existing hardware, rather than a new hardware product. The software for Garmin Running Power (GRP) is their Connect IQ data field, but unfortunately, it won't run on any Connect IQ enabled Garmin watch. In fact, it will only run on the Garmin 935, Garmin Fenix 5X, and Garmin Chronos. (It supports the Fenix 5/5S, but those models appear to have hardware issues with sensors.) You also need a sensor that supports Garmin's Running Dynamics, which is available embedded in a heart rate strap or a clip-on pod. To get any meaningful data out of GRP, you'll also need a Footpod, preferably Stryd (more on that later.)

Like any other running power meter, GRP estimates power primarily from your running pace and the slope. Running intensity is proportional to pace, and generally proportional to incline, but the relationship between intensity and running downhill is rather more complex. GRP claims to use three other factors:

I'm still testing GRP, but here are my initial thoughts. 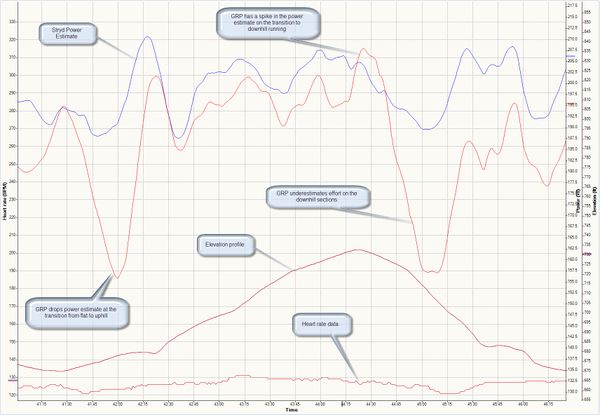