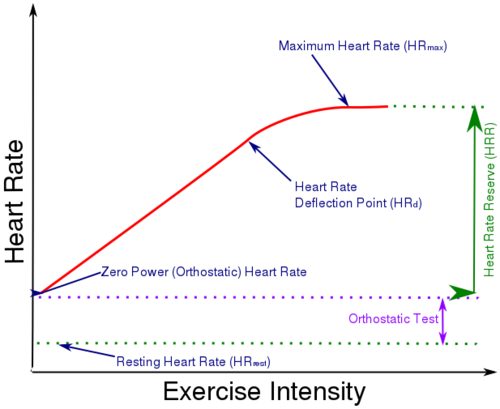 Maximum heart rate (HRmax) is the fastest rate the heart is capable of beating and it must be tested as it cannot be calculated. Like any muscle there is a limit to how fast the heart can contract, and this limits how fast the heart can beat. This maximum heart rate is not a "safe limit", but a physiological limit. It is not possible to exercise and push your heart rate beyond its maximum; if you see your heart rate go higher than the previously recorded maximum all you're doing is redefining what the maximum value is. 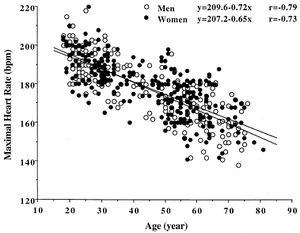 3 Does HRmax decline with age in athletes?

There is some evidence that HRmax may not decline as rapidly in endurance trained athletes as it does in the sedentary population. For instance, Jack Daniels looked at elite athletes in the 1968 Olympic games and then repeated the study 25 years later[2]. The athletes studied had a reduction in HRmax of only two BPM. However, another study[3] showed HRmax declining from 184 BPM at age 28 to 165 BPM at age 60, which is 19 BPM in 25 years, or 0.76 BPM/year, close to the average.

4 Does HRmax vary by sport?

It is often suggested that HRmax varies with the mode of exercise. If you consider HRmax to be the highest Heart Rate that the heart is capable of achieving, then this makes no sense. However, some sports do not use sufficient amounts of muscle to max out the heart rate. If you consider an extreme example, doing bicep curls would not demand enough oxygen to raise the heart rate to HRmax. This means that sports like cycling, which use a smaller number of muscles than running, will not raise the heart rate to HRmax. However, there will be a highest heart rate for that sport, and using that value as HRmax may be useful as the sport specific HRmax will reflect how hard the working muscles are being used. So if you have a HRmax of 200 while running, but 180 while cycling, then it is appropriate to use a 'HRmax' of 180 for cycling activities. So exercising at 75% of HRmax would be 150 when running and 135 while cycling. The lower Heart Rate when cycling will reflect the fact that the heart and lungs are not working as hard when running as when cycling, but the active muscles should be performing at a similar level.

5 What does HRmax mean? Is higher better?

There is no correlation between HRmax and performance, and HRmax cannot be used as a way of evaluating training or fitness. There is possibly a slight reduction in HRmax is fitness increases. This may be because fitness increases the size of the heart, and larger muscles move more slowly.

It is possible to evaluate exercise intensity as a percentage of HRmax, but this is a flawed approach as it does not take into account the Resting Heart Rate (HRrest). It is better to use Heart Rate Reserve, which is based on the difference between HRmax and HRrest.