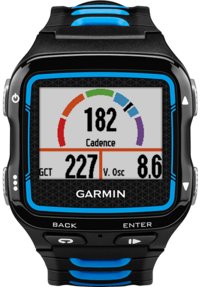 The Garmin 920XT is an update to the Garmin 910XT, adding many of the features from the Garmin 620, while shrinking in size to become far less bulky than its predecessor. It's a large watch, but I found it comfortable even on my tiny wrists. Its GPS Accuracy is disappointing, and using the Russian GLONASS satellites makes this worse. However, the 920XT is the first of several watches in the Garmin range to support the revolutionary Connect IQ. This will allow the 920XT to run applications, much like a smartphone. The 920XT has a clear display, real buttons, and rich functionality that make it an attractive option if you can afford it. The Connect IQ extensibility adds some potential future proofing. For a simple evaluation of a GPS watch, I look at how well it can answer some basic questions:

For ultramarathon running the battery life of the 920XT makes it a strong candidate for shorter races (50 miles/100k). But if you hope to be still moving during the Second Dawn, then you should look elsewhere. See Watches for Ultrarunning for more details.

Here are some of the watches that are competitors for the 920XT:

The Garmin 920XT has middling GPS Accuracy; neither the worst nor the best.