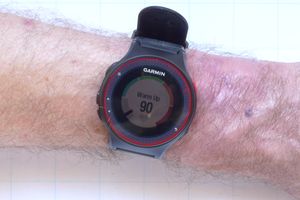 The Garmin 225, showing the display of Heart Rate from its Optical Heart Rate Sensor.

The big difference between the 225 and the Garmin 620 is the addition of Optical Heart Rate Monitoring (OHRM). I've found that OHRM is not ready for real world usage. I'm also a little disappointed in the way Garmin has crippled the 225's software compared with the 620. The older 225 doesn't have Garmin's Connect IQ which is another significant shortcoming, and I'd argue it should be a major factor in your choice of watches. For a more fundamental look, there are four basic questions:

The 225 is not a good choice for ultrarunners, as its battery life is too short. See Watches for Ultrarunning for more details. (Turning off the optical heart rate monitor only increases the battery life a couple of hours.)

The Garmin 225 does rather poorly for GPS accuracy, and rather worse than the similar Garmin 620. I was expecting it to be using the same chipset and antenna as the 620, which I would expect to give similar GPS performance. It's hard to be sure of the underlying chipset without disassembly, but the problem could also be due to a change in the antenna due to the extra optical HRM.

There's a nice teardown of the Garmin 220 (the 225 without the OHRM) on microcontrollertips.com.