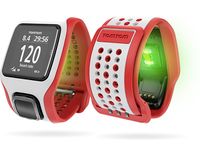 The key feature of the TomTom Cardio Runner is its Optical Heart Rate Monitoring, rather than requiring a separate chest strap. Other than that, the TomTom does not inspire, though with the latest firmware it's fairly respectable and easy to use. You're paying a premium over some of the better watches, especially as the optical HRM does not work well. I think that the TomTom is only worth considering if you really want the built in optical heart rate monitoring, otherwise look elsewhere. For a simple evaluation of a GPS watch, I look at how well it can answer some basic questions:

The TomTom is not a good choice for ultrarunners, as its battery life is too short. See Watches for Ultrarunning for more details.

These graphs show the TomTom Cardio Runner against the record of a traditional chest strap. The top of the graph shows the two recordings superimposed, with the TomTom in red and the chest strap in blue. The lower line on the chart is the difference between the two readings.

With the 1.8.42 or later firmware, the TomTom Runner has reasonable GPS Accuracy, but I'd expect it to do better given its use of the SIRF GPS chipset and from the tracks is creates.