The Garmin 610 represents good value for money, providing all the key features you're likely to need in a small package. It misses out on some of the cool new abilities of the more recent devices like it's successor, the Garmin 620. With the release of the Garmin 620 the price of the 610 has started falling, so it has become better value. While the 620 has many more features than the 610, the 610 is actually a better watch as it has slightly better GPS Accuracy and can display pace from a Footpod. 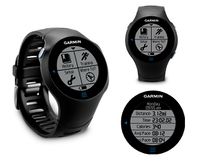