A comparison of the best marathon training plans 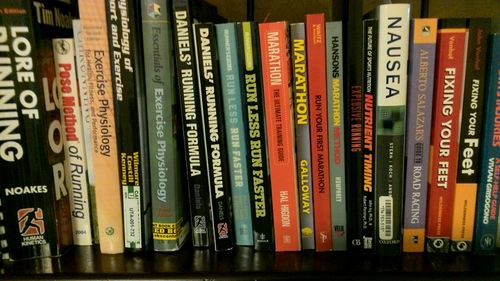 What's on your bookshelf? I've looked at a many of the popular marathon training plans so you don't have to.

This comparison covers many of the most popular marathon training plans, and has a short description of the plan, a list of the key attributes and a high level summary of each level of the plan. For the Long Runs, I start listing the lengths with the first run of 16 miles or longer and do not include the taper period. You can find more details on each plan in these sub-pages:

If you've used a Marathon training plan in the past then please fill in the Marathon Survey.

1 The purpose of this comparison

This comparison should not be used to choose a plan by itself. The goal is to provide you with some guidance around which plans are candidates so you can do further research. The comparison is also based on the plans themselves, not any supporting information such as the training methodology or other advice. This comparison does not attempt to be comprehensive review of all plans, but to cover a few of the most popular plans.

2 Unique Aspects of the Plans

This summary attempts to distill each of the plans into their unique points.

3 The Will to Win

As Juma Ikangaa said, "The will to win means nothing without the will to prepare." The plans below can work, but they are not guaranteed to produce success, as long distance running requires a big commitment of time and effort. It is vital to count the cost that this training requires; none of these plans will help you if you don't follow them.

4 Mid Plan Adjustments and the Golden Rule of Training

The Golden Rule of Training is "to stay injury free so you can continue training". While this sounds obvious, it can be hard to follow. If you are struggling with a particular training plan, either unable to complete the workouts, or the workouts leave you feeling wiped out, then it's probably better to change your plan than to continue on. It's far better to arrive at the start line slightly undertrained than burned out or injured. You may have to find a different plan, or modify the workouts in your existing plan, though the latter can be tricky. Depending on how far through your training cycle you are, and how badly your suffering, the adjustment varies. Here are some possible modifications.

It is quite possible to use one of these plans as an initial basis and then tweak it to your particular needs. There are trivial tweaks, such as doing the Long Run on a different day, to major changes. Changes such as swapping out runs that are not key workouts for cross training or rest can be done quite easily. However, the more extensive the change, the more experience you need to understand the implications. I've added some notes on each plan where I believe modifications are advisable.

6 Modifying the Plans for Continuous Training

The vast majority of these plans assume you're starting off from a low level of training. One of my Top 10 Marathon Training Mistakes is detraining between marathons. If you race a marathon every six months and your training pattern is to have a two month gap between finishing one race and starting doing your Long Runs for the next race, you will lose a disproportionate amount of your fitness. Instead, I would recommend that after you have recovered from a race you quickly return to doing 16+ mile Long Runs. Most of the plans shown here can easily be adapted this way. Simply ignore the weeks leading up to the first 16 mile Long Run, and start your training at that point for the next race.

Different people will respond differently to any given training plan. Some people will respond well and become fitter, some will not be stressed enough and won't improve, while others will be stressed too much and become injured or unable to Supercompensate. A plan that has a higher level of training stress will produce a greater benefit in the subset of the population that can withstand the stress, but will have a larger number of people that become injured or unable to adapt. Thus, a harder plan may have strong advocates, but it may not be suitable for a wider population.

8 Want to Look for in the Marathon Training Plan

Marathon training plans differ but at least partly because there is no consensus on what is best. I think however there are some key attributes to consider.

The table below gives some high level guidance as to the suitability for the different plans for different types of runner. In the table, the numbers 0-5 indicate suitability with 5 being more suitable. There is a lot of individual variability, so a plan that is marked low for a particular type of runner does not mean it won't work for anyone in that category, but it's less likely to be a good candidate. Likewise, a rating of 5 does not mean it will work, just it's a better candidate. As always, I'd like to hear from anyone that disagrees ;}

The table below looks at the general characteristics of the various plans.

Some of the plans have different number of days assigned to different activities as the plan progresses, in which case I've used a rough approximation.

This section provides some detailed analysis of the long runs in each of the training plans. While some of the information is self-explanatory, some may require you to read the notes below the table. Only a subset of the plans for lower mileage, 4 hour marathoners is include'd'. For a complete table, see Full Characteristics Table

Below is the list of the long runs for a sample of the plans. Only a subset of the plans for lower mileage, 4 hour marathoners is include'd'. For a complete table, see Full Long Runs Table

It is hard to recommend the best overall plans for first-time marathon runners because their situation and objectives can vary so widely. First-time marathon runners could be highly experienced at racing shorter distances, or completely new to structured training. They could be aiming for a competitive finish, or just hoping to survive. Therefore, I'd recommend you read the suitability comparison above, and understand how I've characterized each type of first-time runner.

I have not included any individualized plans. This approach allows you to input things like a race goal, your weekly mileage, training effort, schedule length and when you want to start. This is partly because these plans require a fee for each set of inputs, making them extremely expensive if you want to get an overview of different paces and weekly mileage. The other major problem is that because they are customized, the algorithm for generating the plans can also change without notice.