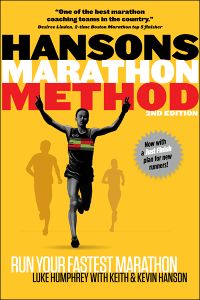 The Hanson's Marathon Method has gained attention because it limits the longest Long Run to 16 miles for most of their plans. While I disagree with the Hanson approach to Long Runs, they do include marathon paced midweek running, and many runners have had success with Hanson. However, the results of the Marathon Survey suggest that relatively few uses of the Hanson plan actually limit their long run to the recommended 16 miles. The book includes three fully documented plans ("Just Finish", "Beginner", and "Advanced") plus an example list of workouts from an Elite runner. (This article should be read in conjunction with my Comparison of Marathon Training Plans.)

The Marathon Survey shows that users of the Hanson plan rate it about four out of five, which is about average (most runners like their plan). Runners improved their time over their previous run by an average of about 11 minutes, which is a little less than many other plans. About a quarter of the runners Hit The Wall, which is also about average for the survey. Respondents also indicated they felt that the long runs were too short, but the speed work was about right. The average Long Run distance was 18.65 miles, which is the lowest of any of the plans, but still significantly longer than the recommended 16 miles. Only about a third of the runners using the Hanson plan actually limited the distance to the 16 miles.

The Hanson's limit of 16 miles for a Long Run is based around a number of concerns, which I've listed below, along with my thoughts on their concerns.

The Elite plan is included in Appendix A of the book, and is not covered in great depth.

7 Comparison With Other Plans