Jeff Galloway's Marathon: You Can Do It! 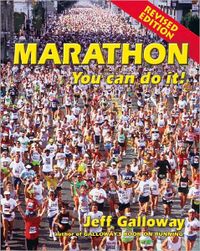 Marathon: You Can Do It!.

The Jeff Galloway training program is based around taking Walking Breaks to increase the distance that can be covered, and to run the Long Runs slowly. These plans are a good candidate for a 4:30-5:30 marathon runner and probably the best option for 5:30+ hour marathon runners. In addition they may be appropriate for people whose injury history makes running the marathon distance continuously problematic. The use of the Galloway approach for faster marathons is a little more controversial. (Note that Jeff Galloway has two books with Marathon plans – Marathon: You Can Do It! and the earlier Galloway's Book on Running. He also has more details on Walking Breaks in his book The Run-Walk-Run Method. (This article should be read in conjunction with my Comparison of Marathon Training Plans.)

A common concern is that Walking Breaks are not suitable for faster marathoner. I'd like to consider Walking Breaks for training and racing as two slightly separate issues.

The use of Walking Breaks during a marathon makes sense to me for runners taking more than 4:30 to finish, and I believe they are the best option for those taking 5:30 or longer to finish. For faster runners things are less clear. Galloway reports over 100 runners improving their times to below 3:00 using his approach, and there is a report of Galloway coaching Jeff did coach one athlete that achieved a 2:28 finish time by using 15 second Walking Breaks for the first 20 miles. Their prior PR was 2:33, which is a 5 minute reduction. This indicates that the Galloway approach can be viable, but it that does not mean it's optimal. My main concerns with using Walking Breaks in a faster marathon is the stress on the body in transitioning from running to walking and back again. As your pace becomes faster, so the transition becomes more stressful.

2 Characteristics of the Galloway Plan

These paces are calculated from the details given in Galloway's book The Run-Walk-Run Method. I've created two sets of tables, one for walking at 20:00 min/mile which is a fairly easy walk and another set for walking at 15:00 which is quite brisk. There are paces for specific marathon finish times. The first columns are the times you'd need to run/walk in the race itself. The next columns are the times for run/walk to hit the target training pace of race pace plus 2 minutes per mile. I've included a third set of columns that use +20% rather than a fixed 2 minutes/mile.

5 Comparison With Other Plans