A chart of different TRIMP calculations against heart rate.

There are various ways of measuring the impact of exercise and these measures are often termed "Training Impulse", or TRIMP (TRaining IMPulse). The simplest approach is to use training volume (mileage or time), but it is better to use Heart Rate. There are various Heart Rate methods to establish training load with varying degrees of complexity and sophistication. It is also possible to use perceived exertion or other metrics. It should be remembered that All models are wrong, especially when we are trying to model something as sophisticated as the human body. Running at an easy pace for a long distance creates different training stresses from a shorter distance at a high intensity, and the two cannot really be equated in a usable model. However, some metric is important if we are to evaluate and understand a training program. TRIMP can be used to Model Human Performance to evaluate the effect of training over time.

The simplest and most common way of measuring training stress is to use training volume; either mileage or time. This approach is attractive because it is simple, but it does not take into account exercise intensity. Running 10 miles at an easy pace is far removed from 10 miles of hard Interval Training.

Using a Rating of Perceived Exertion has the advantage of needing no technology. At the end of the training session (ideally within 30 min. of finishing) the athlete rates the intensity of the session using the Borg CR10 RPE scale. This scale goes from 0 to 10+, and multiplying this session RPE value by the session time in minutes gives a value for the training load of that session. So if an athlete runs for two hours and rates this as an RPE of six, the TRIMPcr10would be 120 x 6 = 720. The units for this session load are not absolute, nor of a really comparable between athletes. The subjective nature of the RPE scale can introduce some repeatability problems. Also, the last part of the workout tends to disproportionately influence how the athlete perceives the overall exertion. However, while this method lacks the precision of a Heart Rate based training load, it does include some aspect of the athletes Mood State, which may be useful in determining Overtraining Syndrome. In addition, the perceived exertion may work better for workouts such as weight training, or plyometrics, where Heart Rate alone does not truly capture the training load.

The simplest and most basic form of using Heart Rate to evaluate training load is to simply multiply the average Heart Rate for a workout by the time in minutes. So if an athlete runs for two hours with an average Heart Rate of 140 BPM, the TRIMPavg is 120 x 140 = 16,800. This method has the advantage of using the absolute measure of Heart Rate, and the simplicity of a trivial calculation. However, the floor in this method is that the average Heart Rate does not really reflect the difficulty of a workout. Consider two workouts, each an hour-long. The first is a steady-state workout with a Heart Rate of 130 BPM. The second workout is an interval training session, where 50 min. is spent at around 120 BPM with 10 min. of intervals and 180 BPM which is also an average of 130 BPM. Both workouts have a TRIMPavg of 60 \*130 = 7,800. The equivalent TRIMPavg suggests that both workouts are equally difficult, but in practice the interval training is much harder.

This approach works well if you are using a Heart Rate Monitor that will display the times spent in each zone, but without transferring the details to a computer for more sophisticated analysis. However, there are some serious flaws in this technique. The most obvious is that a small change in heart rate could move from one zone to another, which could double the TRIMPzone score. The scaling factors are also linear, but moving from 50-60% HRmax to 60-70% is far less than doubling the difficulty. By contrast, exercising at 100% rather than 90% is far harder than the 0.25 increase scaling factor would suggest. Finally, using %HRmax is inferior to using Heart Rate Reserve.

A more sophisticated approach uses Heart Rate Reserve and an exponential scaling factor to account for the fact that higher intensity training as a disproportionately high training impact[2][3][4]. The formula for calculating TRIMPexp is

These constants were developed based on the experimentally observed relationship between heart rate and lactate level. For men this will give a TRIMP value of 0 to 4.37 per minute and for women 0 to 3.4.

A worked example would be a male athlete with a HRmax=200 and HRrest=40 training for 30 min. at 130 BPM. The TRIMPexp is therefore

Which is a value of 32. This is obviously a simplified example as in reality an athlete heart rate will vary over time. To implement this algorithm requires a software package with access to the records of the heart rate. Thankfully modern Heart Rate Monitors makes this relatively trivial.

The range of TRIMPexp and TRIMPcr10 are not the same. For each minute of exercise the TRIMPexp varies between 0 and 4.36 for men and between 0 and 3.4 for women, while TRIMPcr10 varies between 1 and 10. However it is trivial to multiply TRIMPexp by 0.436 or 0.34 so that the values have similar ranges. This allows for different types of workout to use different schemes, with the results combined. This can be further refined so that TRIMPnorm is set in a prioritized manner:

This calculation is supported in the SportTracks Dailymile Plugin by setting the calculation method to "Normalized Heart Rate & Intensity" in the plugin settings page:

If the intensity is set on a workout, that intensity overrides the heart rate calculation (this is on the workout tab): 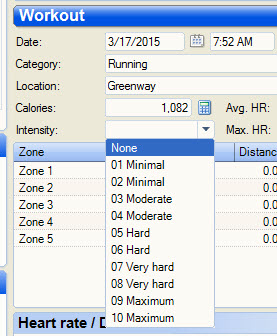