There are a number of approaches to modeling how training changes performance and these models have some obvious value in optimizing a training routine, especially for tapering.

The TSB model will be examined first, as it's the simplest to understand.

2.1 TSB for a Single Workout 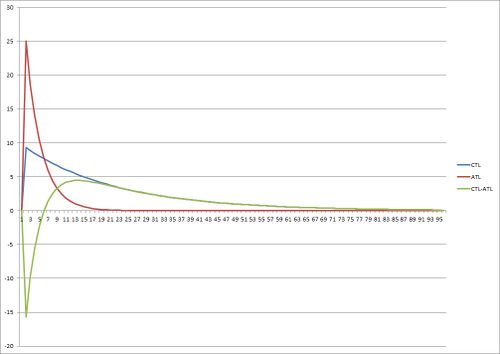 The image above shows the effect of a single workout on the Training Stress Balance. You can see the workout creates a peak in both ATL and CTL. The peak is greater ATL, but reduces more quickly than in CTL. The Training Stress Balance is CTL-ATL, and you can see it initially go negative indicating a reduced ability to perform, then rises to be positive as CTL becomes greater than ATL. This green TSB line is the same as that seen in Supercompensation. 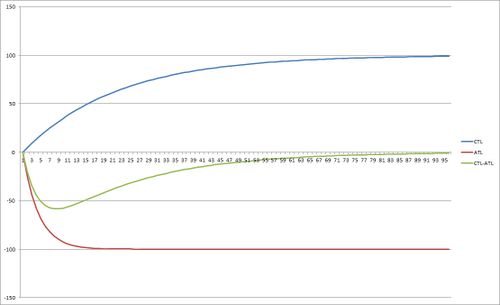 The effect of a continuous series of identical workouts on TSB is shown in the image above. The ATL rises sharply and reaches a steady-state, with CTL rising more slowly to a greater level. The TSB (CTL-ATL) goes negative, slowly returning to zero.

Because the TSB model is simpler than the other two, it only requires the number of days that ATL and CTL decay over. The typical starting point is 7 days for ATL and 42 days for CTL.

Understanding these details is not required for using the TSB, but you may find them interesting.

The basic formula for calculating ATL/CTL uses an Exponential moving average that is calculated like this:

As you can see this is an iterative approach, calculating the value for the oldest workout, then iterating through each subsequent workout. The calculation for λa and λf is:

2.5 Limitations of the TSB model

The main limitation of the TSB model can be seen in the graph above, which shows that training reduces performance and never improves it. The TSB model only indicates an improved performance when training is reduced, as shown below. 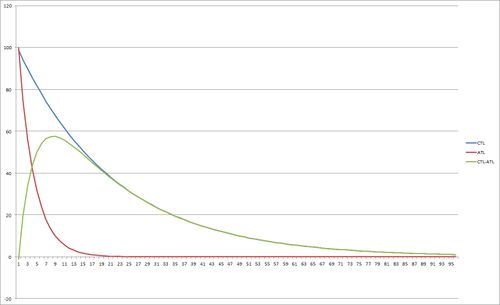 The TSB model when training is reduced from a stable level of 100 TRIMP per day to zero, showing the rapid drop in fatigue (ATL) and the slower drop in fitness (CTL), resulting in an improved performance (TSB).

The Banister model is a little more complex mathematically than TSB, using an exponential decay to model the effects of training stress. Unlike the TSB model, the Banister model will show that a steady state of training will improve performance. Of the available models, Banister's is the most experimentally validated.

The formula below looks rather complex, but is actually fairly simple to implement.

Here it is as some simple pseudo-code for those that want to implement it.

Thierry Busso created a refinement of the Banister model to try to take account of how an increase in Training Monotony also increased fatigue. This modification of Banister changes k2 from being a constant to being an exponential decay of the training stress.

The value of k2 uses a similar exponential decay:

5 Flaws in the models

There are a number of practical flaws in these models.

6 Comparison of the Models

These three models are implemented in the free SportTracks Dailymile Plugin.