Difference between revisions of "The Science of Running Shoes"

The design of most running shoes does not match the available science, and understanding this will help you know What to Look for in Running Shoes. The commonly held beliefs follow this logic: Runners get injured due to impact and excessive Pronation, running shoes reduce impact and pronation, and therefore running shoes reduce injury. Unfortunately, every part of this rationale seems to be flawed. There are other aspects of shoe design, such as the raise heel or arch support that have even less evidence to support them.

1 The Myth of Running Shoe Types

There is good evidence to support the widely held belief that injury rates among runners are quite high, with estimates of injury rates varying between 20% and 80% of runners[1]. It is widely assumed that impact forces and excessive pronation cause running injuries, and that running shoes are designed to alleviate these problems[2][3][4][5][6][7]. This leads to the common recommendation that different types of shoes should be recommended based on a runners arch height. In fact, REI[8], Zappos[9], Runners' World[10], and Road Runner Sports[11] all include this advice. 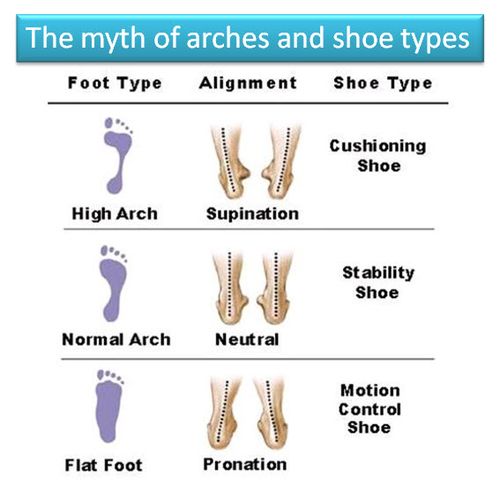 This image probably originated with the "The Running Shoe Book"[12].

The relationship between impact and injury is less clear than one might suppose. It has been suggested that while excessive impact can result in injury, lower levels of impact are the stimulus for improved strength and performance[13][14]. 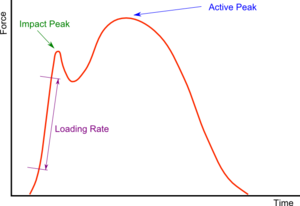 There are various ways of evaluating impact, and not all studies use the same metric or are not clear on which metric is used.

There is evidence that the impact seen in running does not result in injury:

However, there is also some evidence of a relationship between higher impact and stress fractures, but not other types of injury:

The evidence for the correlation between pronation and injury is rather mixed. This is compounded by the use of arch height as a proxy for pronation. 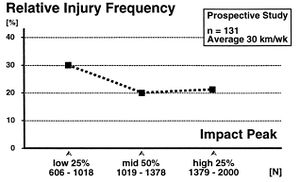 A graph of peak vertical impact force and the frequency of running-related injuries[16].

There is evidence that increased cushioning does not reduce impact, and may even increase it.

As noted above, the interaction of impact and injury rates is unclear.

The evidence indicates that even Motion Control shoes can only reduce pronation by around 1.5%, which is unlikely to be enough to make any real-world difference.

A common feature in running shoes is for the heel to be thicker than the forefoot, something that is commonly called "drop". In the 1980's a drop of 12-15mm was recommended to prevent Achilles tendon and calf injuries[50], but there is little evidence to support this:

Several studies have found there is no evidence to support the idea that running shoes can reduce injury rates[57][1][19]. One 2015 study did show a reduced injury rate with motion control shoes.

Studies have consistently shown that heavier shoes reduce running economy[63][64][65][66]. Each 100g/3.5oz added to the weight of each shoe reduces running economy by about 1%[67][66][68][69]. Studies of cushioning and Running Economy have provided conflicting information. I believe this conflict is due to some studies using a cushioned treadmill to compare barefoot and shod conditions. Not surprisingly, if a study uses a cushioned treadmill, the cushioning provided by the shoe does not confer any additional advantage over the barefoot condition. Analyzing the research, I conclude that a well cushioned running shoe can improve Running Economy by an estimated 2-3.5% compared with a weight matched un-cushioned shoe[67][66][70]. Note that running shoes provide less cushioning in colder temperatures[71]. There are indications that a highly flexible shoe that is modified with a springy carbon fiber plate might be more efficient than a highly flexible shoe on its own[72][73].

The Heel Counter is intended to link the heel of the foot to the shoe,

Most research looks at factors that might be related to injury risk, rather than injury rates directly. The one study so far that compared barefoot/minimalist running and injury rates found broadly similar injury rates. This suggests that minimalist or barefoot running neither increases nor reduces the risk of injury. However, there remains some compelling evidence that the transition to barefoot or minimalist footwear is correlated with higher injury rates, especially stress fractures in the foot.

While this page is dedicated to the current scientific research, I do want to add a few personal observations as a counterpoint.