HrPwr is the relationship between heart rate, and power output. It can evaluate Running Economy and Heart Rate Drift. HrPwr is easy to implement, and I have published a Connect IQ data field called HrPwr that's available here.

My initial approach to measuring Running Economy outside of a lab was to use heart rate to estimate the effort and distance covered for the effort. This works okay on the flat, as distance covered is a good measure of effort. However, as anyone who has run hills knows, slope dramatically change effort. The Stryd footpod estimates the power output based on pace and elevation changes, which solves this problem nicely. It also gives the possibility of comparing data from running with cycling, though I've found the Stryd power estimate to be much higher for a given perceived effort than cycling.

There are three uses for HrPwr.

My HrPwr during a long run. You can see the gradual decline in HrPwr as I become dehydrated and Glycogen depleted.

The formula I use is below and is the power output in milliwatts per Kg per heartbeat.

I've used Zero Power Heart Rate rather than Resting Heart Rate as I've found that heart rate when standing is a little higher than the resting heart rate.

The Connect IQ data field is a simple numeric display, so it should work on most Garmin watches that support Connect IQ 1.3 or later. It will record several data streams into the FIT file that are in the Garmin app or website. (A future version might allow you to select which to record.) 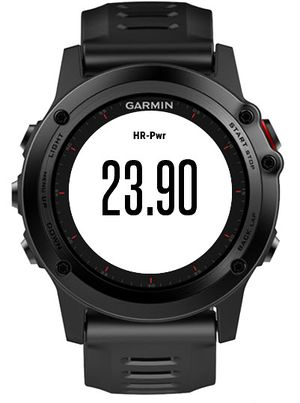 The HrPwr data field on a Fenix 3

While HrPwr can be calculated as an instantaneous value, I've found it more useful to smooth the data and to delay the power slightly. The delay is less than ideal, as heart rate often falls off more slowly after a reduction in power than after an increase in power. That problem compounds as the duration of exercise increases, as fatigue causes heart rate to remain elevated for longer.

This graph shows the smoothed HR and the smoothed and delayed Power. This is from a series of short, intense intervals. You can see the peaks line up reasonably well with the default values.

The connect IQ field uses a simple weighted smoothing where SmoothHrPwrCounter is set to the number of seconds of smoothing required. This algorithm is more efficient than other approaches, which is important given the limited processing power and memory of a Connect IQ device.