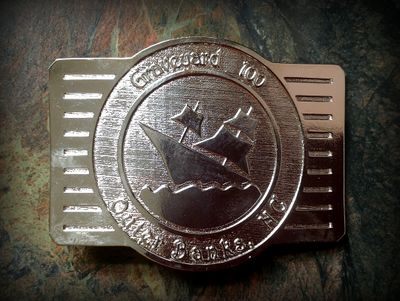 I really like the Graveyard 100 logo, and it makes for a great finishers buckle.

Like the weather in the Outer Banks, the 2013 Graveyard 100 was unpredictable, with the final course being decided 5 hours into the race. The organizers and the runners both rose to the challenge, and the event was a success.

The Graveyard 100 is a point-to-point 100 mile and 100 Km race along North Carolina's Outer banks. The Outer Banks are series of narrow barrier islands, over 200 miles long. They are famous for being the site of the Wright Brothers first powered flight and for the 1,000+ shipwrecks that have occurred there. These shipwrecks gave the area the nickname 'the graveyard of the Atlantic', hence the name of the race and the race logo. The race is a flat asphalt course, but the weather at this time of year is unpredictable and can be severe, creating some unique challenges.

Just before the 2013 race a winter storm hit the East Coast, causing flooding and storm damage. Even after the storm passed, high winds caused the sea to wash over the course route at high tides. The biggest problem was at Rodanthe (mile 60), which caused periodic road closures and stranded vehicles. Thankfully the race director had contingency plans in place so the race was not cancelled. The race started as planned at 5am, and at the 9am high tide the damaged area was evaluated. At that point the road was impassable and the course was changed to an out-and-back. The road closure posed a number of issues beyond the course change. For the race director, supplies and volunteers were staged on the southern part of the course and were cut off, so he had to buy new supplies at short notice. Everyone had to change hotel plans, but the local companies were extremely helpful and cooperative. For the runners, the biggest problem with the road closure was that the wind was blowing from the north, so the tail wind would become a head wind for the second half of the race. Thankfully there was no rain, and the clear skies made for sunburn during the day and a breathtaking night sky.

The race director had invited some of the best ultrarunners to the 2013 race. He invited Mike Morton, the holder of the men's US 24 hour record and a number of course records. Mike won Badwater last year, but missed setting the course record by 90 seconds, so when the race director asked Mike who he'd most like to race, he said Valmir Nunes, the current Badwater record holder. Sadly Mike had a stress fracture in his foot and could not race, but I got to spend some time before the race with Valmir, who is a charming and softly spoken Brazilian. The Women's field included Connie Gardner, who is the women's US 24 record holder and is preparing for the 24 hour world championships in May. It was also great to see the ultrarunning Icon Fred "Doom" Dummar back after he injured his knee landing badly on a parachute jump.

The first 20 miles of the race went well, with my pace a little faster than I expected, partly due to the tail wind. For the next few miles the route went through streets that were flooded. The ankle deep cold water was not fun, but not much of a problem. However, the ankle deep quicksand was a problem, filling your Shoes with sharp stones and sand, and it slowed progress down to a crawl. The race director had said at the race briefing that it was okay to go around the flooding if we wanted to. It added a few blocks of extra distance, but that was well worth it for the time saved. At about mile 28 I found out we would have to turn around, which was bad news as the wind had been rising from 8 MPH at the start to 14 MPH with 21 MPH gusts by 9am. At the turn around on Bodie Island the wind was strong enough to make running difficult and my pace declined. 3.5 miles after the turn around we got back off Bodie Island and the wind was not so bad, but my pace never picked back up again. I finished in 17:41 as third male, fourth overall (provisional results).