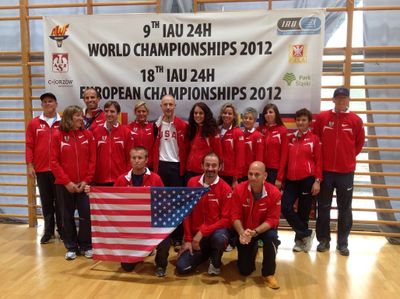 The 2012 USA Team; there are more pictures on Google+.

I was part of the 2012 team representing the USA at the 24 hour world championship in Katowice, Poland. My race went badly, with severe nausea and light headedness preventing me from moving for a couple of hours half way through the race. The team as a whole won several medals:

Although I'm disappointed with my failure, the overall experience was wonderful.

1 What's different about the World Championships?

There are some obvious differences with the World Championships, and some rather more subtle ones.

These different aspects of the event produce a remarkably different experience. There is a strong sense of being a team and of national identity.

I travelled with my wife Lynn from Charlotte to Katowice via Munich, leaving Tuesday afternoon and arriving Wednesday afternoon, which was about 23 hours door to door. We stayed in student dorm rooms at the local university, which were Spartan but comfortable. All food was provided, and we had a couple of race briefings on the Thursday and Friday. Friday was also the opening ceremony, with all teams in their country uniforms and a gymnastics display. We got to walk around Katowice a little, and I reveled in being in a foreign culture. I slept well Wednesday and Thursday, but Jetlag caught up on Friday night, and I was wide awake until 3am. Only getting 3 hours sleep before a 24 hour race is worrying, but I was not sleepy until later Sunday night after the race.

The course was just under a mile and was rectangular in shape. Though it was nearly flat, the aid station was on the long downhill section, so you didn't get the full advantage of the slope. It was also the point where you'd naturally take a walking break to eat or drink, so you have a choice between walking on the downhill or carrying your provisions half way around the loop. I had two problems with the course – the brick surface and the sharp turns. Half of the course was a brick surface with the remainder being asphalt. Most of the brick surface was quite good, but one section was made of old bricks that were breaking up. I did not get any blisters, but the bricks seemed to cause problems deep in the foot that were remarkably painful. The international organizers (IAU) did not know of the bad surface until the day before the race, and there was talk of changing the course, but that never happened. The sharp turns did not bother me at first, but after a few hours I started to have problems with my left hip rotator. The course was well lit, so there was no need to carry a light, which was nice. Also, there was a big display by the start line, and the idea was to show each runner's lap time and lap number. However, the display was so close to the timing mat that the display was too late to be of any use. The park itself was beautiful and we saw a few weddings photos being taken around us.

As you can see from the map below, the course is essentially a rectangle, with four left turns and four straights. However, those straights are not actually straight, but slight curves. I was surprised how many runners stayed to the left of the path, even though the tangent for two sides was on the right. Though the difference between the tangent and the left is slight, over the course of 24 hours the difference becomes significant. The gap between the team gold medal and the bronze team medal was less than 1%. Over time, runners became aware of the tangent, which actually had some orange marks on the ground from the course certification, but it took longer than expected. 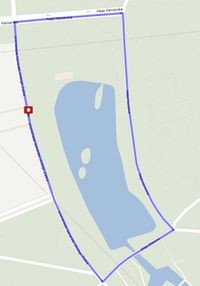 The aid for this race was quite different to anything else I've experienced. There was a large tent that held the aid station with an area for each team. This tent was a few hundred feet long, with aid tables were on both sides of the track. We were very tight on space, with each runner having about 12 inches x 18 inches of table space (30cm x 45 cm). No aid could be given to a runner outside of the aid tent, and the crew were limited to within one meter (3 feet) of the front of the table and were forbidden to accompany a runner. This meant we only had one person in front of the aid table, which caused a number of problems. One person could not remember everything that each runner needed, or sometimes even understand what they wanted. Getting the wrong thing in a 24 hour race can be disastrous; one runner got tonic water rather than carbonated water. The two are similar, but tonic water contains quinine, which can cause diarrhea. Another runner could not get their usual drinks and had to eat cake instead, which caused some problems. One runner was given Caffeine, which they'd never had before; luckily there were no serious adverse effects.

My race started well, and I tried to go out slowly, which is tough when the leaders are passing you at a breathtaking pace. I was a little too aggressive, and I was on a 160+ mile pace for the first 8 hours. Things were going well at this point except for my left hip flexor and my feet. I stopped and massaged the hip flexor and it was fine after that. However, the rough brick section of the course was pounding my feet and the pain was quite remarkable. Some Ibuprofen reduced both the pain and some of the swelling, but it was still a concern. Somewhere near the 13 hour mark, my right hip rotator become painful and wanted to go into spasm. I stopped at the aid station to use The Stick on it, but within a few moments of stopping I became overwhelmed with nausea and light headedness and had to sit down. After 30 minutes I get moving again, which was a tough as I got quite chilled and stiff. I walked a couple of laps, and then when I tried a little broth, the nausea hit me again. I was stopped for 90 minutes that time and I was only able to get out of the chair after the team doctor gave me some prescription anti-nausea medication (probably Zofran). The medication removed most of the nausea, but things were still not quite right. I was able to stand, and after a while start walking again. At that point the competitive race was over for me, and so I tried some intermittent running, then resorted to simply walking. I was kept company by Deb for the last 5 hours, and we walked together, cheering on the USA team as they continued to lap us.

After the race, we had to walk across the park to the awards ceremony, which was a long way in the hot sun, taking the weary runners about 20 minutes or more. We had runners who could not walk, and had to find a motorized cart to take them. When we arrived, we found we were part of a large festival, which was nice, but we were outside in the full sun with no food or drink. After about half an hour or so, we were told that plans had changed and the awards would be back at the athletes village. So, we walked back across the park to take a bus back to our accommodations. Again we had to find a cart, which caused some problems when one of our runners became separated from their supporting family. Back at the athletes village things changed again and we were told we would have a meal before the awards ceremony. We sat down to eat about 4 hours after the finish of the race.

Though I'm obviously disappointed with my performance, the overall experience has been wonderful. Though there were some logistical problems that go along with this type of competition, the fact that the other runners and their crews were such nice people more than made up for it.

There were a number of things that worked well:

As always, there are things that did not work.

There are a number of things I will change next time around.