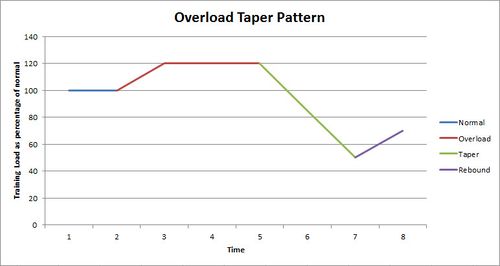 This style of taper is constructed from three phases; Overload, reduction, and rebound.

The Overload phase consists of an increased training load, typically 20% more. This period has to be kept fairly short to prevent Overtraining, typically 1-3 weeks. The level of Overload will depend on how intense the normal training load is. A runner who is already training near their maximum capability would want to Overload for a shorter time than a runner who has more training headroom. Many training plans tend to have the peak training load towards the end of the program, but often the peak is a little too early and too minor to be considered an Overload period. (See A Comparison of Marathon Training Plans.)

The rebound is a short increase in training load, just before competition. This approach was developed from the observation that some athletes in multiday competitions such as track races have their performance improve as the heats progress. How much the training load should be increased is not well defined, but the general idea is to focus on increased intensity with a moderate uptick in volume. The rebound should be in the last few days before competition.

Because I was pacing the 2011 Thunder Road Marathon, I decided to experiment with a Three Phase Taper. Given this was not a major race, I decided on a short taper of two weeks. I did a one-week Overload, followed by a four day decay, and a one day rebound. My weekly mileage leading up to the three phase taper was 114, 108, 102, 150, 140. Therefore I targeted to a 20% Overload based on a 140 mile per week giving me a ~170 mile target. The details of each day's training are shown on the table below. The Overload was extremely tough and towards the end of is unable to maintain the required mileage to hit my target. The first day of the decay period I was hoping to cover 16 miles at marathon pace, but I was too tired off to the Overload and could only maintain marathon pace for 11 miles. The next three days constituted a very short exponential decay taper, and the day before the race was a single day rebound up to 6 miles. The day before the race also included some Carbohydrate Loading which resulted in weight gain of approximately 3 1/2 pounds.

A two-week period was too short to work well. A one-week Overload seem to be quite effective but I don't think I could've tolerated much more. However the fatigue from that one-week Overload was too great to recover in just six days. That said, I found much better prepared for pacing the race than I expected. Maintaining marathon pace throughout the decay and rebound worked remarkably well and I felt very comfortable that pace during the race. The Carbohydrate Loading was especially successful as I've maintained a low carbohydrate diet until the day before the race. Next time around I will follow a similar pattern, but I will allow a longer decay period.