There are several components that make up running ability, including V̇O2max, and economy. V̇O2max is the ability of our bodies to generate energy for running and is the focus of a lot of our training. Running Economy is how far and fast you can run with a given amount of energy. Good economy is a critical part of running, and Cadence is one element I recommend runners focus on. (For the financial cost of running, see The Cost of Running.)

1 The Importance of Improving Running Economy

Running Economy can vary by as much as 30% between runners of a similar V̇O2max[1]. The two charts below show the V̇O2max and running economy of Paula Radcliffe over a 10-year period[2]. Over that time Paula Radcliffe's race performance dramatically improved even though her V̇O2max did not. This suggests that for elite athletes at least, improvements in running economy are critical.

There are several approaches that may improve your running economy. For details see The Science of Running Economy.

In an ideal world, we'd be able to easily measure our Running Economy and see if things are improving. If we could measure our breath, find out how much O2 we consumed and how much CO2 we produce, we'd know how much energy we burned (and from fat or carbohydrate). Such testing would require controlling the time of day, day of the week, diet, and footwear for each test[4] as well as specialist equipment that is not available to recreational runners. (Systems such as Cosmed's K5, PONE, and VO2 Master's VM Pro are becoming available, but cost thousands of dollars. Because this is not practical, the best measure we have of energy consumption is our Heart Rate. This is far from perfect, as Heart Rate can vary for other reasons besides supplying O2 for energy production. However, I believe it is a useful approximation and so I developed the simpler "Relative Running Economy." I've created an improved version called "HR-Pwr" which used the power estimate from Stryd to give a more useful estimate.

My initial approach was to use heart rate to estimate energy cost and distance covered to measure the effort. This works okay on the flat but is thrown off by changes in elevation. The Stryd footpod estimates the power output based on pace and elevation changes, which solves this problem nicely. It also gives the possibility of comparing data from running with cycling, though I've found the Stryd power estimate to be much higher for a given perceived effort than cycling. The formula I use is milliwatts per Kg per heartbeat, which I've called HrPwr (It's available as a Connect IQ data field.)

6 How to use Relative Running Economy

The calculated Relative Running Economy cannot easily be used to compare different runners. It can be used as to track how your running economy is improving over time, though it is also influenced by changes in fitness. Over the weeks and months of training your Relative Running Economy should gradually improve. For instance, I've seen my RRE go from 110-120 to 130-150 over a period of a few months. Sadly, I've also seen my RRE drop when I put on body fat (see Weight Loss and Performance.) This evaluation of my fitness this proved to be remarkably useful to me. 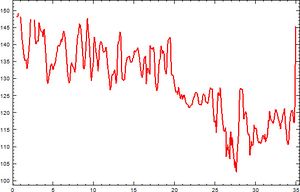 Efficiency value over a 35 mile run.

Where the speed is in meters per minute. Billat's formula uses Heart Rate on its own rather than adjusting for Resting Heart Rate. This formula is inverted, because it's looking at cost rather than efficiency. However, you can see the similarity below. (Note that Billat's paper shows the speed in both meters/minute and Km/minute. I queried this with Billat by email and confirmed this should be meters/second.) 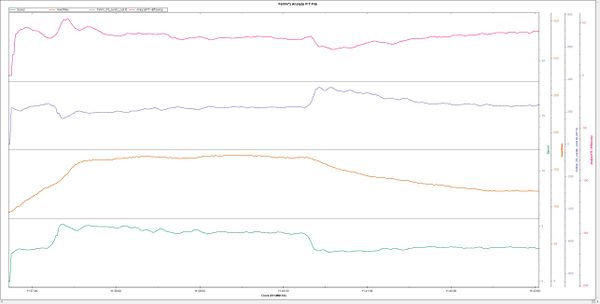