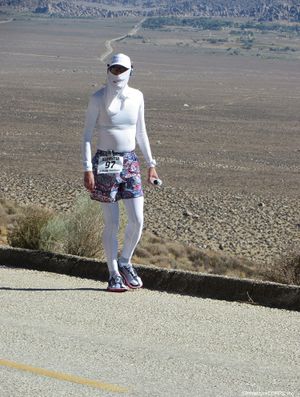 At the 2014 Badwater 135 wearing a long sleeved UnderArmour HeatGear top. I'm also wearing HeatGear leggings, and I have made a face mask out of an older HeatGear top that worked really well.

I've been wearing UnderArmour HeatGear since at least 2009, and it's still the best option for most situations. I've run in HeatGear in a wide variety of conditions, from the intense dry heat of Death Valley during 2014 Badwater 135 to the oppressive heat and humidity of the 2010 Keys 100. HeatGear has a number of benefits.

There are a few situations where HeatGear is not the best choice.

I performed this simple test of how black and white materials behave in the sun. I placed a black and a white HeatGear top over a cardboard box in a full sun. I dampened the middle of each with 2 tablespoons of water and left them for about 15 minutes. The air temperature was about 66f/19c. this test is not realistic, as the temperature of the shirts on their own will rise far higher than when they are worn. However, I believe it gives a good indication of how important it is to have light rather than dark clothing when you're running.

Under Amour have a variation of HeatGear called "Iso-Chill." UA claim that Iso-Chill feels cooler to the touch and it will "pull heat away from the skin, physically making you cooler." I assume they mean the fabric will transmit heat more easily, but details are lacking. UA also claims Iso-Chill will increase the time taken to reach V̇O^=2^ max, but they give nothing to back up this claim. The only detail they do mention is treating the fibers with titanium dioxide, which is how I found Iso-Chill. There is research showing that titanium dioxide fabrics will reflect far infrared (heat) and improve infrared emissions. The idea is that you could have a fabric that's dark but reflects heat like a white fabric. I decided to try some Iso-Chill fabrics and compare them with regular HeatGear. I already have a white long-sleeved top, and I ordered a white Iso-Chill top, along with camouflage-black Iso-Chill leggings and mostly white regular HeatGear leggings. I used some regular black 2XU leggings for a worst-case scenario.

A simple evaluation is to lay out each item of clothing in full sun and see how hot the get. This is a bit artificial as clothing is normally in contact with a body, but it gives an idea of the heat absorption. The white Iso-Chill top was coolest, at only 25c, with the white HeatGear top are warmer at 29c, a surprising difference. The mottled leggings are 33c, which shows how much the small amount of black mottling changes the temperature. The camo black Iso-Chill leggings are a toast 47c, and the 2XU are up to 52c. So, the color is still the dominating force in the temperature, but the Iso-Chill helps. I've run in all these items quite a bit, and my real-world findings match the thermal images quite well. The Iso-Chill top is a bit cooler than the normal white top, but it's not a big difference. The black camo Iso-Chill leggings make a noticeable and worthwhile difference to the perceived temperature in full sun, and I'd always wear them over regular leggings if I was trying to stay cool rather than trying to stay warm. The mottled white leggings win out for hot sunning conditions if you don't mind the look. Generally, I've had a mixture of complements and odd looks with the mottled white leggings, so it will depend on your aesthetic tolerance which you chose.