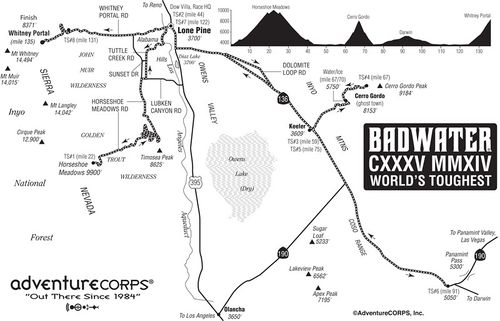 Badwater is one of the best known and toughest ultramarathons. Even though I've done many 100 mile races including the Keys 100, plus pacing at Badwater last year, the difficulty of the race still managed to surprise me.

The race went well given the difficulty, and I ran conservatively to maximize my chances of finishing.

The toughness of Badwater is not any single factor, but rather the way these factors combine. 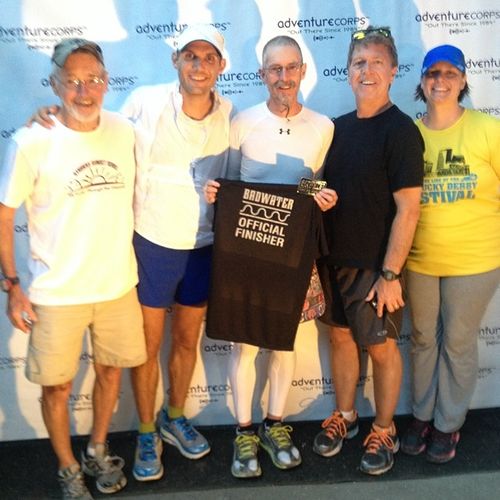 5 What I'd Do Differently

I wore the Basis Activity Tracker during Badwater to see what it would record. As you can see below, my skin temperature stayed reasonably cool for most of the race, a reflection of the effectiveness of my cooling approach. I'm not sure how much I trust the perspiration rate as I was being sprayed off with water regularly, which may have confused things. You'll notice that the Basis detected my nap around 3 AM which is pretty cool.

This is the data that the Basis Activity Tracker recorded during Badwater. The Basis web site only displays one days data at a time, so this is two days stitched together. The orange balls are the number of steps taken, the purple line is skin temperature, and the blue line is perspiration rate. The temperature scale for skin temperature is on the right side of the graph in Fahrenheit.

I also wore my Suunto Abmit2R for the race, and the Heart Rate data is shown below.

My legs were a little sore the next day, but were soon fine for short runs and normal use. It took another week or two for the endurance to return, which may be due to Glycogen depletion.

My biggest problem was insomnia that lasted for nearly a week. It was not until the Sunday following the race that I started to feel sleepy; up to that point I was exhausted, but without the desire to sleep, and I felt like I was not sleeping well. If you look at the sleep report from the Basis you can see that I did not sleep much the night after the race, which is normal for me after an ultra. However, I did not sleep much the Wednesday or the Thursday and my sleep was distinctly interrupted. It was not until Friday that I start sleeping more and I didn't feel the benefit of the increased sleep until Sunday.

I've been monitoring my Heart Rate Variability (HRV) for a while, so I was curious about how Badwater would impact it. HRV is generally believed to reflect training stress, and is a candidate for detecting the dreaded Overtraining Syndrome.