The cheapest way is to measure your Cadence is to simply count how many times your foot touches the ground in a minute. However, it's much easier to use a running watch that displays cadence. Some watches will use a small Footpod attached to your shoe, but others make use of an internal accelerometer. Garmin makes a Heart Rate Monitor (the HRM4) that will also measure Cadence. There's more advanced options, such as RunScribe which make Footpods that measure a wide range of biomechanical data in addition to pace and Cadence, including Braking G's, Impact G's, Ground Contact Time, Foot Strike, and more.

To understand the relative accuracy of different ways of measuring cadence, the best option is to perform certain statistical analysis. To do this, I recorded data from many runs and wrote some custom software to analyze the results. I've used a Garmin Footpod as the reference standard, as I believe this is the most accurate approach. This is a time-consuming process, but provides a numeric value that you can use to choose the best device.

I use the ISO 5725 definition of Accuracy as the combination of trueness and precision, which is illustrated below.

The Garmin HRM4 uses accelerometers in the chest strap to measure Running Dynamics, including cadence. On the graph below, points falling on the green diagonal line accurate, having the same value on both devices. The further the points are from the green line less accurate they are. There is a blue regression line which in an accurate device would be in line with the green identity line. The points are added transparently to give an indication of density, with a full black color representing 100 overlapping readings. The chart represents well over 10,000 measurements, which I believe is enough to give a good indication of accuracy. The Garmin HRM4 has a trueness of -1.0 steps per minute (SPM), which suggests that over the course of a run, it will give you an average reading that is only one SPM too low. Its precision is 3.8 SPM, which means that at any given moment the reading is unlikely to be out by about four steps per minute, which is a little more than I would like. 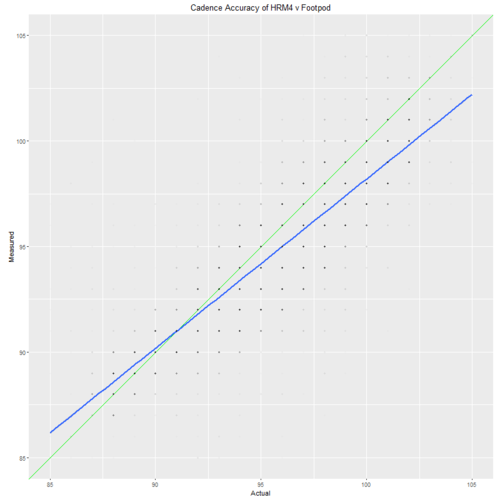 A scatter graph of the Garmin HRM4 against a Garmin Footpod.

The simplest way of evaluating the accuracy of the cadence measurement is to run with several devices, and look at the graphs they produce. This provides some visual indication of the types of issues that devices may encounter, but it provides no quantification of their accuracy. I've included a number of these simple, anecdotal comparisons as background, but there's no substitute for the statistical analysis above.

The graph above is from a High Intensity Interval Training session, which is a challenging test of Cadence monitors. The Warmup and Cooldown sections of the run are not included, just the intervals. You can see the cadence rise to above 100 during the fast, high intensity intervals, then drop back to my more normal 90, then a further drop as I walk for a short period before commencing the next interval. I don't normally walk, but I wanted to challenge the cadence monitors a little extra. I avoided looking at any device during the run, as that can prevent the internal accelerometer based systems from operating without the normal arm swing.

The graph above is another test during a High Intensity Interval Training session, and again, the Warmup and Cooldown sections of the run are not included. You can see that under steady state conditions, all the watches do reasonably well, but not during the interval section.

A comparison of cadence monitoring devices during a Long Run.

The graph above is the comparison of a Garmin 920XT with a Footpod (red line) with a Garmin 225 using its internal accelerometer (blue line). You can see the internal sensor is far noisier, but worse, it has an overall bias. The Footpod showed an average cadence of 91.1 while the internal sensor was 89.3. That's not a huge difference, but it's far from ideal.

The Polar V800 cadence compared with a Garmin as a reference.

The Polar V800 provides reasonably good tracking of Cadence, though it is biased a little high. For this example run it had an average of 95.5 rather than 94.6. The V800 tracks the walking break at 20 minutes, the faster pace at 30 minutes, and the Fartlek beginning at 50 minutes.