Difference between revisions of "Ketogenic Diet as a Treatment"

The Ketogenic Diet may help with the treatment of cancer, including brain tumors[1]. Currently most of the available research is based on animal studies, with just a few human case studies. However, the research to date looks promising.

There are a number of medical conditions that reduce the supply of oxygen (hypoxia), and the Ketogenic Diet may reduce the damage that occurs as a result. 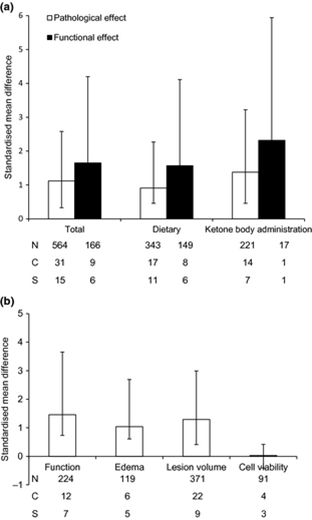 There are some concerns that the ketogenic diet raises blood lipids, and this in turn may increase the risk for heart disease. One study of children using the Ketogenic Diet for Epilepsy showed a deterioration of blood lipid profiles, and only one in six were in the commonly accepted levels for a pediatric population[5]. Another study of adults on the Ketogenic Diet for Epilepsy also showed a worsening of blood lipids[6]. It's also been reported that around 30% of children on the ketogenic diet have elevated cholesterol, but it's also noted that this is normally transient, and the levels return to baseline after 6-12 months[7]. However, other studies have shown that the ketogenic diet has no adverse effects on the lipid profiles[8][9][10] or actually improves the markers[11][12][13][14][15]. (A study of children on the MCT Diet did not indicate any adverse blood lipid changes[16].) It seems possible that the structure of the Ketogenic Diet when it's used for epilepsy is in some way different, causing this split in results.

AD is a degenerative neurological condition characterized by memory loss and there is currently no treatment. Models of Alzheimer's disease (and Parkinson's) suggest that 4 mmol/L of BOHB can protect neurons and may play a therapeutic role[17].There is some evidence that a ketogenic diet may not only improve the symptoms of AD[18], but may also modify the disease activity itself. These benefits may also apply to other neurological conditions involving neuron death. There is evidence that raising Ketone levels through MCT supplementation without carbohydrate restriction may also improve memory function in AD sufferers[19]. In a study of 152 subjects with mild to moderate AD, half were given an MCT based treatment over a period of 90 days and had significantly improved cognitive scores compared with the placebo control group[20]. A drug called Axona was introduced in 2009 as an FDA approved "medical food" and it consists of an MCT oil (caprylic acid). There is also some evidence that a higher carbohydrate intake is associated with poorer memory, and increased aberrant motor behavior in subjects with probable AD[21].

Parkinson's disease appears to generally result from an acquired defect in the mitochondria rather than genetic causes[22]. Animal studies and anecdotal reports suggest that the ketogenic diet may reverse the symptoms of Parkinson's disease, but there are no published human studies. It is possible to treat Parkinson's disease for a time with dopamine , but free radical damage lessens the effectiveness of this therapy over time[23]. Models of Parkinson's disease (and Alzheimer's) suggest that 4 mmol/L of BOHB can protect neurons and may play a therapeutic role[17]. A 28 day study of five Parkinson's patients on the Ketogenic Diet with blood BOHB levels averaging 6.6 mmol/L (range 4.8 to 8.9) had an average decrease in Unified Parkinson's Disease Rating Scale (UPDRS) scores of 43.4% (range 21% to 81%), but the study had too few subjects and no controls, so conclusions could be drawn about effectiveness[23].

Like Parkinson's disease, the evidence to support the use of the Ketogenic Diet for ALS is extremely limited[24], but human studies are under way. One study showed that the Ketogenic Diet alters the progression of ALS in a mouse model, but it did not extend the survival time[25]. However, other studies of high fat (non-ketogenic) diets in animal models did show an improved survival time[26][27].

At one time, type 1 diabetes (previously called childhood diabetes) was expected to be fatal within a year. The first approach was a starvation diet of 450 calories per day, which lead Fredrick M Allen to use a 70% fat, 8% carbohydrate diet that was the standard treatment before the discovery of insulin.

There is a case report of a radical improvement in schizophrenia with the ketogenic diet[28]. However, this may be due to a removal of the gluten from the diet rather than the overall dietary changes[29].

There are a number of cases that have been reported where the ketogenic diet helps normalize the Mood State of those with bipolar disorder[30]. One report indicated that over 2-3 years the mood stabilization exceeded that achieved with medication[31].

A recent analysis of 13 trials comparing the Ketogenic Diet (KD) with a Low Fat Diet (LFD) showed that the KD resulted in greater weight loss (an extra 0.9Kg/2 pounds), reduced triglycerides and blood pressure, but increased cholesterol[32]. However, while the extra weight loss was statistically significant, the loss of an additional 0.9Kg/2 pounds has limited real world value when the Health Risks of the Ketogenic Diet are considered[32].