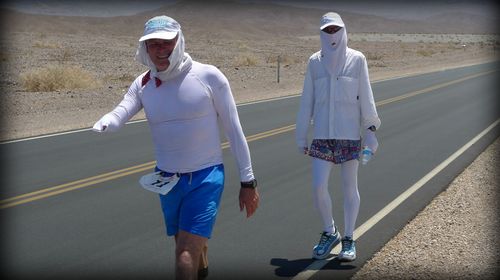 I had the opportunity to crew and pace Chris Moon at the 2013 Badwater 135 Ultramarathon. I wanted to help someone at Badwater because I was considering entering, and I wanted to learn more about the race, as well as support a fellow competitor. The Badwater 135 goes from the lowest point in the US, at Badwater in Death Valley to close to the highest point in the lower 48 states at Mount Whitney Portal, covering 135 miles and 13,000' (3962m) of cumulative ascent and 4,700' (1433m) of descent. The race is held in July, when the heat is at its most extreme, and this year the temperature was higher than usual. While Badwater is an extreme challenge for any athlete, Chris Moon lost his right leg and arm while clearing landmines for a charity in Mozambique, which presents an additional and significant challenge. Chris has four prior Badwater finishes, including two 'doubles', where you return to the start for a 270 mile run. This year Chris was working with Endolite to test a prototype for a new prosthetic leg, as well as raising money for the Cambodia Trust charity. The new technology will offer some big advantages to amputee athletes, but testing out a prototype technology under race conditions adds yet another challenge. The new leg worked remarkably well, but it cost several hours of lost time in tweaking and even minor issues with the fit caused additional pain for Chris. It also slowed Chris down so that he had to work harder to stay within the race cutoff time of 48 hours.

I started pacing Chris on the first morning, as the heat began to rise and I stayed with him until after sunset. I covered about 26 miles, with a couple of short breaks to help with the driving while the prosthetic was modified. During the hottest part of the day I was able to spray Chris with water to keep his temperature under control, and to mule for him so he didn't have to carry things. Once the sun set on the first day the crew took shifts sleeping, so I changed from pacing to crewing just after dark, then I got my 3 hours sleep before returning to pace Chris though the final 50 miles of the race. Initially Chris was making good progress, but by mid-afternoon the combination of sleep deprivation, physical exhaustion, heat, pain from the prosthetic, and phantom pain from the lost leg all started to slow him down. I worked to keep Chris on a steady pace that would keep him ahead of the race cutoff without going too fast and burning him out. Once we hit the climb up to Whitney Portal, things improved dramatically, much to my surprise. The new prosthetic allowed Chris to climb better than he could move on the flat and he was able to dig in and pick up the pace. Chris finished the race in 45 hours, which is 3 hours slower than 2012, a remarkable result given the higher temperatures and the time lost to working on the prototype prosthetic.

I wanted to crew and pace at Badwater partly to help out another athlete and partly to learn more about Badwater with a view to competing myself. I learned a number of things that I'd like to share.

3 Comparison with the Keys 100

There are many similarities between Badwater and the Keys 100, and the design of Keys 100 is based on Badwater. Both are point to point road races in hot conditions with crew support. If you are considering doing Badwater, I'd highly recommend both running the Keys 100 and crewing at Badwater as preparation. (I'd recommend both even if you're not doing Badwater, as they are both great experiences.) I am planning on doing the Keys 100 as part of my preparation for next year's Badwater should I be fortunate enough to get a place. There are a number of key differences between the races: 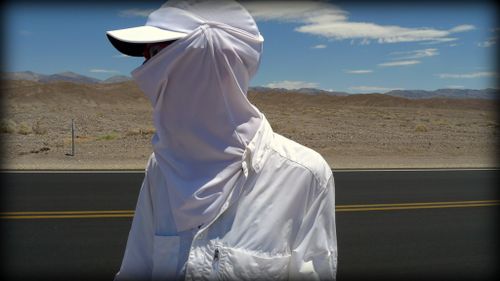 The hat that served me well at Badwater, made from a Halo hat and an old under armor running top.

As usual, I like to record what worked and didn't work for future reference and for the benefit of others. While I was only pacing at Badwater, I went far enough to learn a few things.

There were a number of things that didn't work for me at Badwater.