I've only run the first ~40 miles of Wainwright's Coast To Coast path, but I'd like to share my insights for other runners. This first section from St Bees to Grasmere is moderately runnable for about half the time, though a lot will depend on your skills as a trail runner, and the trail conditions. There are significant stretches of boggy ground that can suck your shoes off, which makes for extremely slow going. A good chunk of the trail is fairly rocky, and in places you're likely to need to use your hands to get up some steep rocky sections. There are fairly frequent places where you could meet a support crew, and several places where you could resupply if your self-supported.

Navigation is tricky, and I'd highly recommend you have the Trailblazer Coast To Coast book (I tore out the relevant maps), and a good GPS watch with the trail preloaded as a course. I used the Garmin Fenix 5X and its navigation guidance was great. I also carried the Harvey coast to coast map and a compass as backup. I found myself using the Fenix to check I was on the right track, with the Trailblazer maps to make navigation decisions.

I've written up my equipment list at Self Supported Runs. 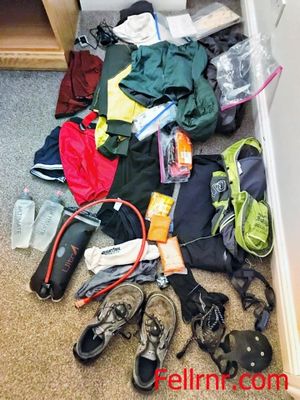 I stayed in the Seacote hotel, which is quite pleasant as long as you get a refurbished room. The hotel is only hundred yards or so from the obelisk that marks the start of the trail.

Dipping your shoes in the Irish Sea and picking up a pebble to carry to the other end is a tradition. This section is nicely runnable, though in places you have a sheer drop down the cliff close by, so I walked a few places that might be otherwise runnable to avoid the risk of an untimely end.

Much of this is on good running surface, with country roads, farm trails, and even a nice rails-2-trails path. There is even a small store that you might be able to buy supplies at if the timing is right. The big problem with this section is the flooded, boggy fields around Stanley Pond. This area seems to be permanently waterlogged, and when I came through it was ankle-deep sticky mud that seemed to go on forever.

There is a fairly steep rise out of Cleator through a forest that's slow going, but quite runnable. The path across the first Fells is a little indistinct and moderately boggy, but I was able to progress fairly well. Keep an eye open for the Cairns and pay attention to the trailblazer maps. The dissent down Raven crag is stunningly steep, though even in the relatively wet conditions I experienced the traction was pretty good. Having polls would really help at this point. After that there is some beautiful running through Nannycatch, though it would be easy to be slowed down by the urge to take photos. There is then the final stretch into in Ennerdale bridge, which has a number of places for refreshment.

The next section along the lake starts off with easy running, then after the brief scramble up Robin Hood's seat it becomes fairly technical. I'm not a stronger trail runner, but I was able to run most of this section. For quite a bit of the time you're very close to the water, with beautiful views.

I kept to the original, low trail, but there are actually 3 options. There is in the high route over the Fells, but I avoided that as I was doing my run in winter. I didn't notice the turnoff to Red Pike, so pay attention if you're going that way. There's also an alternative, slow up path that goes on the right hand side of the river. That alternative looks much prettier, and probably more interesting, but I suspect slower going as well. This section is easily runnable and relatively fast, though it steadily ascends.

It's easy to take the wrong trail after the Y HA (I did), and navigation in this area is tricky, as the ground is boggy and the path is faint. The ascent up Loft Beck is steep, with steps most of the way. Once you're at the top things again turn boggy and you'll need to watch out for Cairns that Mark the way. There is then a runnable if technical descent down the disused tramway, but then becomes steep and ugly for the final section down to the visitor center.

This is a nice, fast section, with much of it downhill. It's not very far, but it's satisfying to move a little faster. When you get to Seatoller, you might think your close to Rosthewaite, but it's a little further. Rosthwaite has a few hotels and inns, where you might be able to do some resupply.

This is a straight line up the valley, and you have a lovely view of where you're heading for. This is mostly pretty good, runnable trails, though it deteriorates a little as you climb. Things start off gently uphill, but becomes a gradually steeper and steeper, becoming steps, and occasional points where you need to use your hands.

From Lining Craig to Greenup Edge Pass, the navigation is tough. The Cairns are tough to see, and there's no real path, just a featureless bog. I took a wrong turn, mistaking one landmark fence post for another, and spent half an hour finding the path again. There are 2 routes down into Grasmere, and I took the higher path which is a little better defined and less boggy. The path is moderately runnable, until it gets to Helm Craig and the descent into Grasmere, where things turn steep, with a number of steps. Once you down, you'll hit some country roads for the run into Grasmere itself. This is a stunning lake district village, but one that gets stunningly busy as well. There's lots of places to resupply, but meeting your crew might be problematic due to the crowds through much of the year. 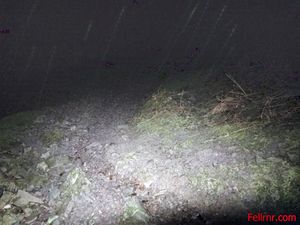 What can I say? It was dark ;{
Retrieved from "http://fellrnr.com/mediawiki/index.php?title=Wainwrights_Coast_To_Coast&oldid=11886"