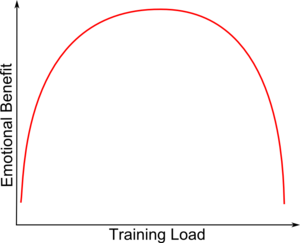 Overtraining Syndrome has been categorized into subtypes based on the associated symptoms[1]. The subtypes are similar to those seen in the DSM adjustment disorder and Major Depression. These categories can help us understand Overtraining Syndrome, even though there is no clearly defined separation.

Some writers distinguish between 'Overreaching' (AKA 'non-functional overreaching') and 'Overtraining Syndrome based on the time it takes to recover. The writers define overreaching as taking between a few days and two weeks[2][3]. Overtraining Syndrome is then defined as a recovery period of at least two weeks[2], but often months[3] and sometimes years[4]. However, this categorization does not seem useful, as there are no other distinctions other than recovery period.

3 Overtraining with anxiety or anxiety with depression

Overtraining Syndrome is assocated with mood changes[7] [8], including anxiety[9]. This mixture of depression and anxiety can cause the athlete to feel significantly nervous, jittery, or worried and may feel tearful or hopeless at times[10].

4 Overtraining with disturbances of conduct

Overtrained athletes commonly exhibit irritability, decreased motivation, and cynicism towards their sport, and for many this can manifest as behavioral difficulties in interpersonal relationships[1]. This can even result in reckless and abusive behavior[1].

5 Overtraining with mixed disturbances of emotions and conduct

Some authorities separate Overtraining Syndrome into two types; sympathetic and parasympathetic. However there does not seem to be significant support for this classification[2].