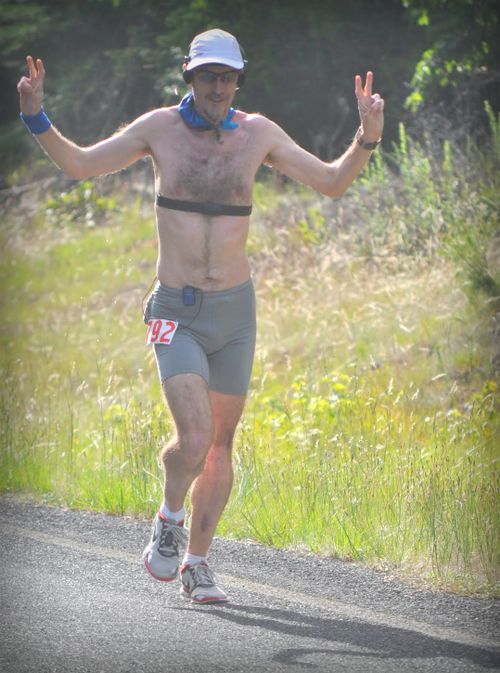 A picture of me running at the midnight boogie race wearing a Jimbo bandana.

The Jimbo Bandana is a bandana that is sown into a triangle shape, with an opening to add ice. The McGinn uses a sock to hold the ice inside a bandana. Both are cheap and effective ways for staying cooler when Running in the Heat, and both are named after the runners who invented them. You can find out more about Jimbo at http://sofarfromnormal.com and Shannon McGinn at http://shannon-creatingmomentum.blogspot.com/p/coaching.html. 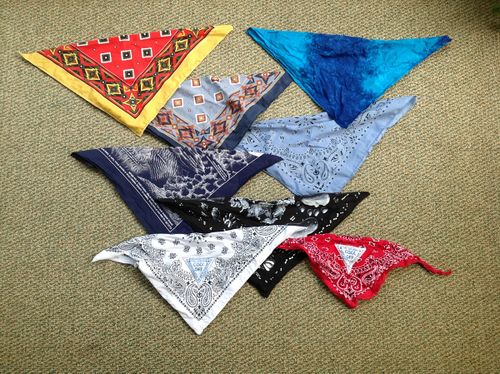 My collection of Jimbo bandanas, along with a couple of the commercially produced cool off bandanas.

The Jimbo bandana is made by folding an ordinary bandana into a triangle shape and selling along the edge nearly all the way. You need to leave a gap that is large enough to get the ice into; too small and you'll have trouble filling it with ice quickly, but too large and the ice will tend to fall out. An improvement on the current design might be to use zipper along one edge, but I've not tried this. 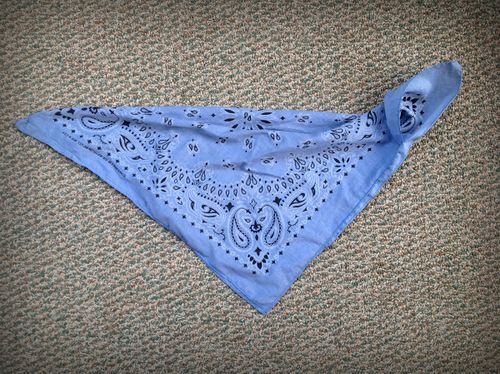 A close-up of the Jimbo bandana with the side opening showing.

The Jimbo bandana alongside the cool off bandana.
Wearing a Jimbo bandana can make a big difference when Running in the Heat, but there are a number of downsides to you should be aware of.

The McGinn is an enhancement to the Jimbo bandana. The McGinn uses a knee-high sock filled with ice, tied off and the bandana wrapped around it. The sock should be thin, such as a dress sock, but not pantyhose type nylons. The McGinn holds less ice than the Jimbo, but it positions it better.

Getting the ice into the Jimbo Bandana or McGinn can take longer than you’d expect. I simply cut the bottom off a quart pot and used it to feed the ice quickly.