HMB is a supplement that may help preserve muscle during weight loss, something that is typically quite difficult. It may also be valuable for those who struggle to maintain weight during heavy training. HMB might improve fat loss, increase muscle gain, and there's slight evidence that it might increase aerobic performance. HMB appears safe at the recommended doses and is not banned. HMB should be taken to time with periods when muscles loss may occur, such as exercise or fasting. I would be cautious about taking HMB before a critical race, as the breakdown of muscle may provide a valuable energy source.

HMB, or "β-Hydroxy β-methylbutyric acid" to give it its full name[1], is naturally produced in the body as the amino acid leucine is metabolized[2]. It's been shown that leucine controls protein synthesis and metabolism[3], and it seems that one mechanism of action is via the HMB metabolite[4]. My personal interpretation is that HMB tricks the body into acting as if it had consumed large quantities of protein, activating protein synthesis and inhibiting protein metabolism.

There are several benefits to HMB that make it of interest to runners.

This isn't medical advice, just my approach that you can use as a starting point. I'm continually tweaking my training and nutrition, so by the time I've finished writing this it's likely to be slightly different! My approach assumes I'm trying to reduce my body fat while keeping or increasing lean mass, which is fairly normal for me. If you're one of the athletes who has trouble maintaining or gaining weight then your approach is likely different. The calcium form of HMB (the cheapest and most widely tested) peaks in the blood about 30 minutes after consumption[12], and has a half-life of about 2.5hours[20]. This means that timing seems to be pretty important. 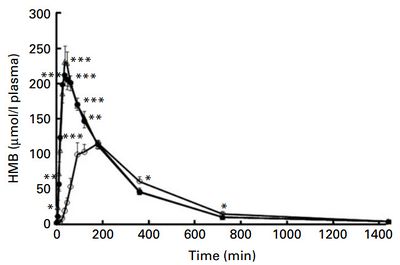 Since it's first use as a nutritional supplement in 1997, HMB has been extensively studied, and found to be safe in both human and rodents[22]. There was one study that found high doses of HMB, the equivalent of over 50g/day in humans, increased insulin resistance[16], though other studies show improved insulin resistance at typical levels (see above). However, contamination of supplements is an issue, with at least one athlete testing positive due to taking an HMB supplement[23].

On a related topic, should you use whey or casein protein? (I'll ignore other types of protein for now.) I'd like to think that using Casein can extend the fat burning into this early part of the post-fast, but I'm not sure the research supports my optimism. Certainly, casein has a lower insulin response than whey[24]. That study compared 0.3 g/kg lean body mass of whey or casein in healthy subjects (that's just ~17g.) The casein resulted in a lower insulin response from 15 to 60 minutes, with a peak insulin of ~110 (casein) v 180 (whey), both pmol/L. The total insulin response (area under the curve) was 15.6 for casein v 18.5 for whey. It's not clear that the difference would change the impact on fat burning (lipolysis.) It only requires 12 pmol/L of insulin to suppress 50% of lipolysis, 22 pmol/L to suppress 70%, and 34 pmol/L to suppress 90%[25]. This suggests that the difference between casein and whey isn't going to impact lipolysis. 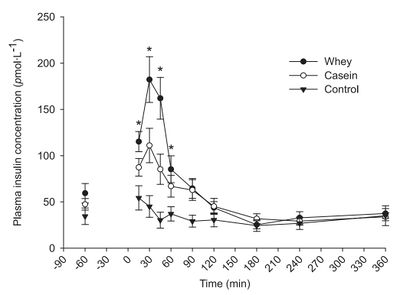 This is the HMB powder I use; it's the calcium form, which is much cheaper and more widely studied than the free acid.