Simply taking a GPS watch on a single run does not provide sufficient data to reasonably evaluate its GPS Accuracy. To perform my testing I measured a course and repeatedly ran the course with each device, gathering 100s of data points on each.

So to gather the data for this test I marked my usual running route at quarter-mile intervals. The course I run along is a little challenging for GPS, with lots of twists, tree cover, power lines, and one bridge that I go under. The bridge carries a 4 lane road, so it's wide enough to cause most watches to briefly loose GPS signal. However, I believe that it's reasonably representative of real-world conditions, and probably less challenging than running in the city with skyscrapers. At both ends of the course there is a turnaround, and I set the mark an eighth of a mile from the end. That way I can evaluate how well the watches handle an about turn. 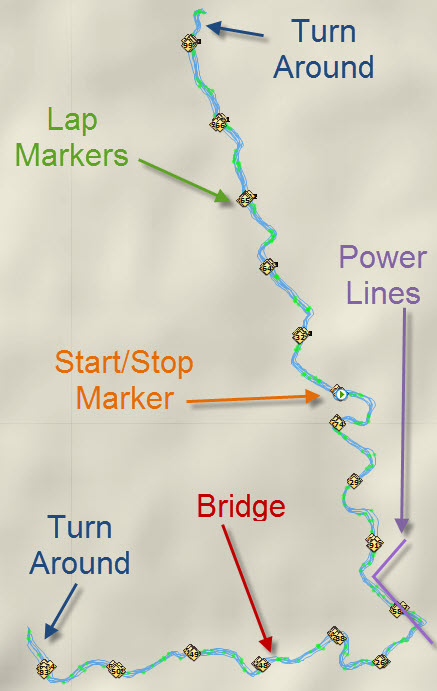 This is the course I use to evaluate the accuracy of GPS Running Watches.

The route was measured using the USATF course certification process. Some highlights:

In addition, I verified the course using a surveyor's wheel, measuring each segment of the course twice. All measurements were within a few inches, confirming the accuracy.

On first usage, a watch is left on and with GPS acquired with a full view of the sky for ~45 minutes. This is to ensure the watch can download the full ephemeris data (it should only take 12.5 mins, but I want to be sure.) To prevent per-run startup problems each device was turned on, satellites acquired, and then left for around 5 minutes before the run starts. This is to counter the problem of a device claiming to have acquired the satellites when it only has a minimal lock. The watches are worn on the wrist or held in the hand in roughly the same orientation as it would be on the wrist. The lap button is pressed as I passed over the marker, and if it is not possible to press at the correct time the lap button is not pressed until the next marker. (Software will reject the data from missing lap marks.)

Some preparation was required to allow for subsequent analysis.

The software uses the TCX format for analysis. Many devices provide TCX files by default, but others require conversion.

The analysis process uses an application I wrote in C#.

The footpod data was collected with a no calibration in the watch (factor = 1.0), and then retrospectively calibrated. This allowed me to provide both raw and calibrated data. I tried several calibration methods:

I calculated the theoretical GPS error for each point using the agi.com C# library. I followed their cookbook for GPS Accuracy Analysis, which consists of:

There are a number of possible sources of error.