Icing is a core part of my recovery process and I've consistently found it to dramatically improve muscle healing. Short periods of ice (~20 minutes) will reduce blood flow which may limit further damage due to excessive inflammation. Longer periods (several hours) of icing increases blood flow, which improves healing. It's vital to use ice (frozen water), not a gel pack to prevent skin damage and for effectiveness.

Cold initially reduces blood flow, but after about 20 minutes the body increases blood flow, possibly to prevent skin damage. This is called Cold Induced Vasodilatation (CIVD) and has been known about since 1930[1][2]). It's important to stay warm overall while icing a muscle, as reduced body temperature prevents CIVD[3][4]. This alternating reduction in inflammation and increased blood flow is believed to act as a 'pump', speeding up heeling. This cycle typically takes a few minutes, as shown below. 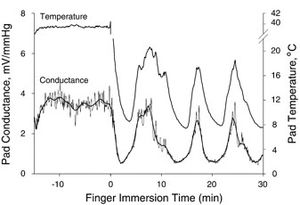 There is remarkably little science produced on Cold Induced Vasodilation. A 2004 analysis of the available research at the time stated "Currently, no authors have assessed the efficacy of ice in the treatment of muscle contusions or strains. Considering that most injuries are muscle strains and contusions, this is a large void in the literature." A 2008 study stated in its conclusion "There is insufficient evidence to suggest that cryotherapy improves clinical outcome in the management of soft tissue injuries"[5][6]. We'll therefore look at some anecdotal, real world experiences and recommendations.

The general recommendation for ice is to apply it for 20 minutes, then remove it for 20-60 minutes, repeating this cycle several times[7]. The general advice is to avoid applying ice for too long as it can damage the skin. I have found while this approach does help a little, it is not as effective as leaving the ice in place for a much longer period.

Does a longer period make sense? Well, a Study has shown that the time needed to cool a muscle varies with the thickness of the fat surrounding the muscle. To lower the temperature 1 cm into the muscle by 7 degrees C, it takes ~8 minutes of ice for 0-10mm fat, but ~60 mins for 21-30mm fat[8]. This suggests that a simplistic 'apply for 20 minutes' guide is inappropriate; to impact tissue that is an inch deep would require at least an hour. One study[9] applied ice for 30 minutes and recorded the temperature at 1 and 2 cm into the muscle (below the fat layer). The results indicated that the minimum temperature was not reached during the application, but 6 to 9 minutes after the application finished. This suggests that 30 minutes was not sufficient to fully cool the muscle. Other factors to consider:

My personal approach is to apply ice for much longer; often for hours continuously. I find that this produces much deeper healing and I have never had any problems. However, there are a number of conditions that would make this approach dangerous, such as poor circulation, diabetes or arthritis[12]. You should also be careful about applying ice for prolonged periods at joints such as elbow or ankle; the nerves are closer to the surface. I know some people like to use a compression bandage to hold the ice in place, adding compression to the cooling. Care should be taken after prolonged icing as the cooled muscles will have impaired control[13].

Damage to cells occurs around -10c/14f[14][15], which is well below the temperature of ice. In fact, the temperature of the skin where it is in contact with an ice pack is normally about 5c/41f[16]. Animal studies that chilled the skin and underlying fat to between -1c/31f and -7c/19f showed no signs of tissue damage[17].

7 The Danger of Gel Packs, Ice Blocks, and Frozen Vegetables

I use ice cubes in a hefty Ziploc bag rather than gel packs as Gel packs start off too cold, and then warm up too quickly. If you use ice, the temperature will remain constant around freezing until all the ice is melted[12]. You should avoid large blocks of ice, as the ice will be at freezer temperature which is cold enough to damage the skin. The goal is to have a mixture of ice and water, which will be around freezing point. Likewise, frozen vegetables can remain too cold and do not result in a layer of water.

Skin temperature against time while icing.

Here are some other tests I performed, showing some of the variation you might experience, with temperatures rising and falling. 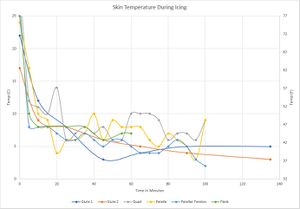 Various other tests of icing.

A 2010 study[18] has shown that inflammation is necessary for healing, something that has been known for some time[19]. The study did not look at the use of ice for healing, only the role of inflammation itself, though it's conclusions were widely misinterpreted[20].

Icing for short periods has been shown do make Delayed Onset Muscle Soreness (DOMS) worse[21]. In my experience, even longer periods of icing do not help much with DOMS.