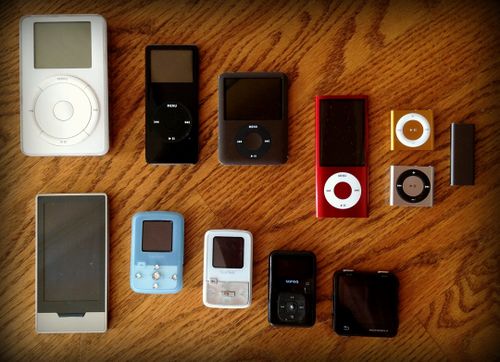 I nearly always run with music, and I've tried many different MP3 players over the years. My favorite player is currently the SanDisk Clip Zip, but different people want different things from their music player, so I've got a number of recommendations depending on your requirements.

1 What to look for in an MP3 Player

Sound quality is more about your headphones than the player, especially when you're running.

These four players are my top recommendations depending on your requirements.

The iPod Shuffle has a number of flaws, the biggest being its 2 Gb capacity, but its ease of use makes it an ideal choice for many runners.

The SanDisk Zip and Zip+ players have been my first choice for many years. These players support the Rockbox third-party firmware that gives the player remarkable functionality. Sadly, SanDisk replaced the Clip Zip/Zip+ with the Jam and Sport models, which don't support Rockbox. The new models are still good MP3 players and the stock user interface isn't as bad as most players on the market.

I would suggest going for the Jam
, though the differences between the players is not huge.

There are two simple modifications to the Clip to make the buttons easier to use and to reduce the chance of water damage. The buttons on the Clip are not easy to find without looking, especially with gloves on. I've glued small bumps either onto the Clip itself or onto a silicon cover. These bumps make it easy to find even when the clip is under clothes and I'm wearing gloves. I've lost a number of Clips to water damage, either from rain or drowned in sweat. Putting some tape over the microSD slot, a silicone cover and a cover over the USB socket reduces the chance of water damage dramatically. It does not make the Clip waterproof by any means, but it does improve the resistance to damp conditions. When it's actually raining, I put my clip either in a ZipLoc bag or in a full waterproof bag.

The seventh generation iPod Nano is an elegant player that can be used while running, though its flaws make it hard to generally recommend.

There are pros and cons to using a Smart phone as your MP3 player.

The earlier version of the SanDisk Clip Zip is the SanDisk Clip+, and while it's a fine player, the Zip is better and cheaper, though as prices for the Zip escalate the Clip+ is worth considering. SanDisk introduced two players as replacement for the Clip Zip, the Clip Sport and Clip Jam, but sadly neither supports Rockbox. If you're after a cheap, basic MP3 player with expandable storage, then they might be worth considering.

The support for Rockbox is rather poor at the moment, so ports for new devices are extremely limited. The best option I found is the XDUOO X3 (
) which supports a forked version of Rockbox ([1]). I found that this works, and it supports two 200Gb microSD cards for huge capacity, and it's beautifully made. Unfortunately, this quality makes it rather too heavy for running.