I wasn't sure I'd like the Altra Kayenta due to its sock liner upper and the lacing system that puts additional pressure on the midfoot. However, it's a light weight and well cushioned shoe, which surprised me with its comfort. I didn't realize that the Kayenta is the replacement for the Altra One, but with hindsight it shares many characteristics with that shoe, including light weight comfort and a tendency to wear a little quicker than I'd like. Even after a few hundred miles, the sole of the shoe has a fairly limited abrasion, but the midsole foam is compressed quite badly under the ball of the foot. Like all Altra shoes it's close to zero drop, and it's shaped like a human foot. However, unlike most shoes, I found there was a reasonable amount of height in the toe box, which combined with a very flexible midsole allowed me to leave the toe box intact, rather than cutting it open as I typically do. The Kayenta is a shoe that I find myself reaching for without thinking, and when I'm running in the Kayenta, it disappears from my thoughts. I've loved running in it, and I just wish it would last a little longer. Just like The One it replaces. 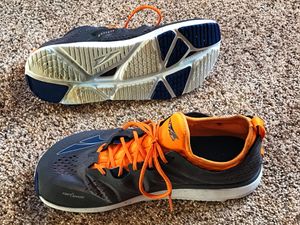