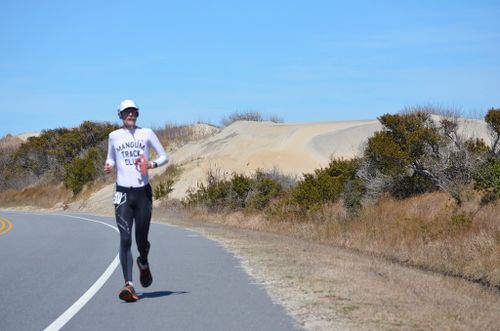 The Graveyard 100, taken by Frank Lilley, used with permission.

With the kinder, gentler weather in 2014, the graveyard 100 went well for me. I started at a gentle pace, and was in 10th place by the first aid station at mile 21. By this point I knew that two of the top runners in the race were way ahead of me, so I continued on at a conservative pace. By the second aid station at mile 42, I was in fifth place and feeling strong, but the leader was now nearly an hour ahead. What the half-way point my pace started to slow a little and while I was feeling strong, I didn't have the ability to speed up. The second half of the race is generally made up of long, featureless, barren and inhospitable stretches of straight road. I generally love the solitude of ultrarunning, but these sections will mentally corrosive and deeply lonely. In many ways this part of the race was remarkably like treadmill running, with no sense of progress or change. I was still in fifth place at the fourth aid station, but I unknowingly passed the fourth-place male, Jan-Erick Olson, in the fifth aid station at Cape Hatteras lighthouse. I learned later that he was hypothermic, though I don't know if this was because he'd slowed up and become chilled, or if he'd overdressed, becoming chilled when he sweated through the extra clothing. I passed the lead female, Connie Gardner, in the last few miles. I finished in fourth place in 16:48:30, which was okay, though I was two hours behind the winner!

1 What Worked and What Failed

For those of you who are thinking about running the graveyard 100 I thought I'd include my perspective on the course. 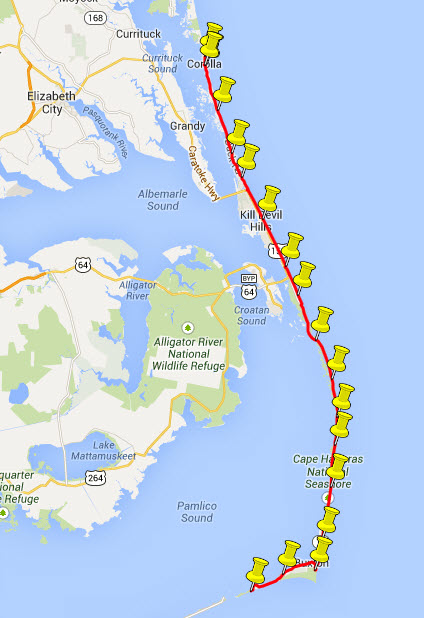 The route of the Graveyard 100, starting near Corolla in the north and finishing in Hatteras in the south.

As with many ultras the weather is a variable that can make the race easier or tougher. However, the Outer Banks is notorious for changeable, violent weather, especially at this time of the year. I feel it's worth enumerating the issues you may face with the weather on this race, as they are more significant than other events.