2008 Double Crossing of the Grand Canyon

In 2008 I did a double crossing of the Grand Canyon, from the South Rim to the North Rim and back again, a run of about 47 miles with only two hills. Instead of the typical 'race report', I did a pictorial report of 17 annotated images.

The double crossing took about 14 hours, with temperatures ranging from freezing to horribly hot, but it was outstandingly beautiful. Preparation is key to this run, as you are self-supported. It is also important to choose the time of year carefully and plan to be able to run on one of several days. Bad weather can make this trip dangerous! The main danger is the heat, which can be intense, especially if it is unseasonably hot. The other issue is with water. There are several water opportunities on the run, but the pipes fail quite often. You need to be able to postpone the run a day or more to allow for repair time. You should read the article on running the double crossing in the April 2008 edition of Ultrarunning magazine. 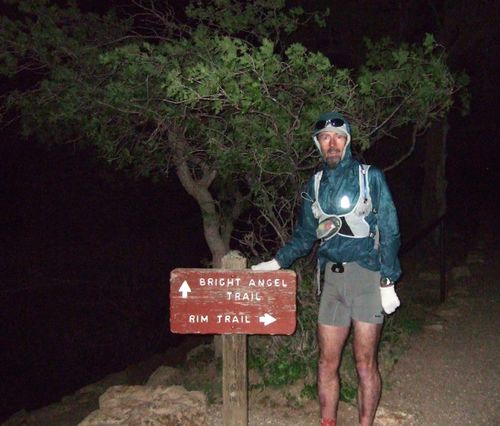 My wife dropped me off at the Bright Angel Trailhead on the South Rim, the start of the 50 mile rim-to-rim-to-rim run. I was very grateful for her getting up this early. The run started at 3:15am; the start time is a compromise. You want to start early to avoid the heat later, but running the bright angle trail in the dark is tough. The combination of what appears to be a bottomless abyss to one side, combined with the knowledge of deep puddles of concentrated mule urine make you cautious. There are many logs across the path to prevent water erosion, but these steps make the decent more interesting. I considered the South Kaibab trail, which is shorter & steeper, but prettier. However, given that I would be at the bottom but sunrise, it seemed pointless. Coming up the South Kaibab trail is a Really Bad Idea, as there is no water. 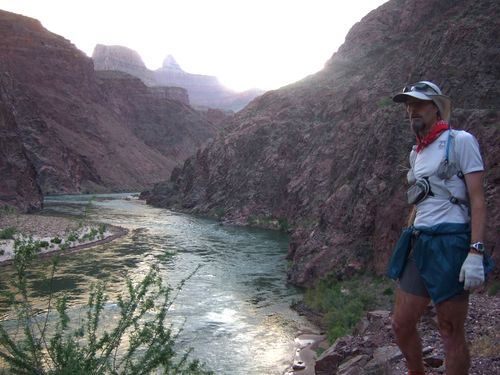 At the Colorado River, 12 miles into this run. This picture uses a small tripod - a great device. 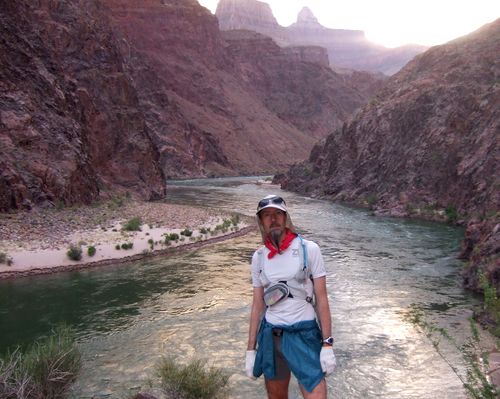 Taken by an early morning hiker. He had just set off from Phantom Ranch. 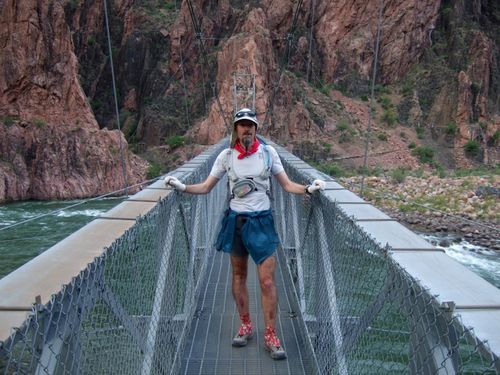 This is one of the two bridges that crosses the river. The mules won't cross this bridge because they can see through the grating, so they have to be taken to the only other bridge on a one mile detour. 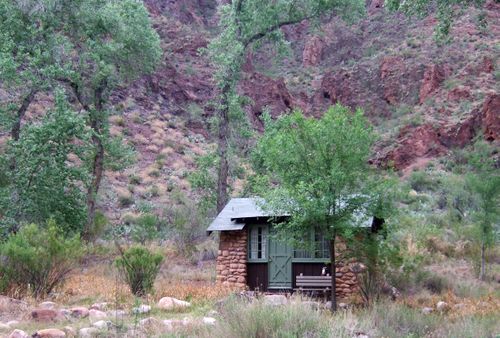 This is one of the cabins available at the Phantom Ranch in the bottom of the canyon for hikers that don't want to camp. You have to book up way in advance. Phantom Ranch also has a cafeteria where those that stay in the cabins can buy breakfast, lunch, and dinner. 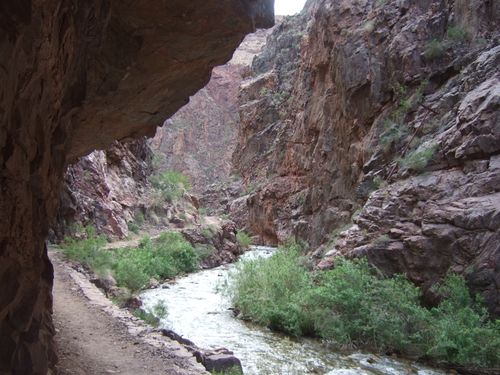 This is a view of a box canyon on the path up to the North Rim. The box canyon is quite pretty, but feels like it goes on forever. The slope is gentle, so you can make good progress both up and down. The box canyon traps the heat, making it quite oppressive on the way back. 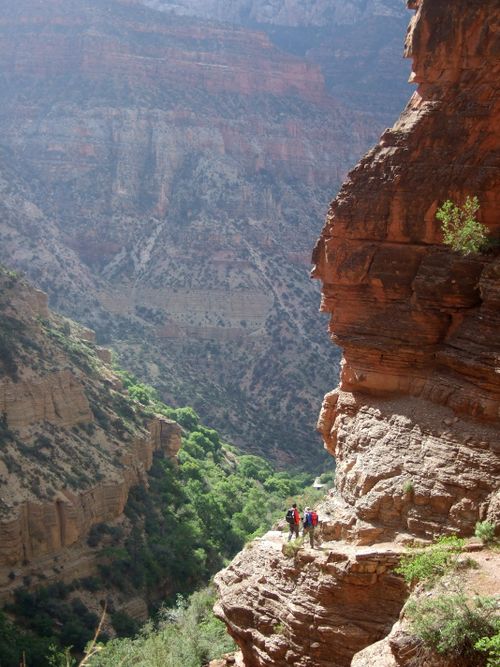 A view looking backward from part way up the north rim towards the Colorado River. You get a sense of how narrow the path is and the drop to the side (exposure). I did not have a problem with the drop, but I can understand how some could find it tough. 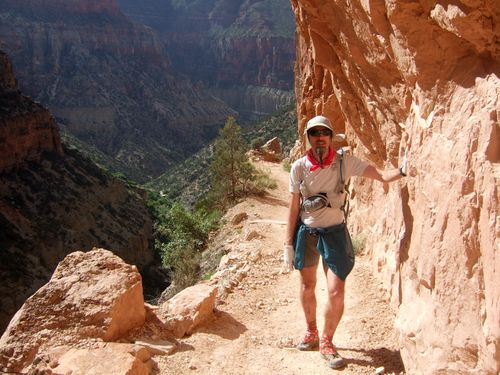 Another hiker took this photo. This is a good representation of how wide the North Kaibab trail north of the cottonwood campground. It is not too narrow, but the drop of is long and passing people can be worrying. Some of the trail is bare rock. 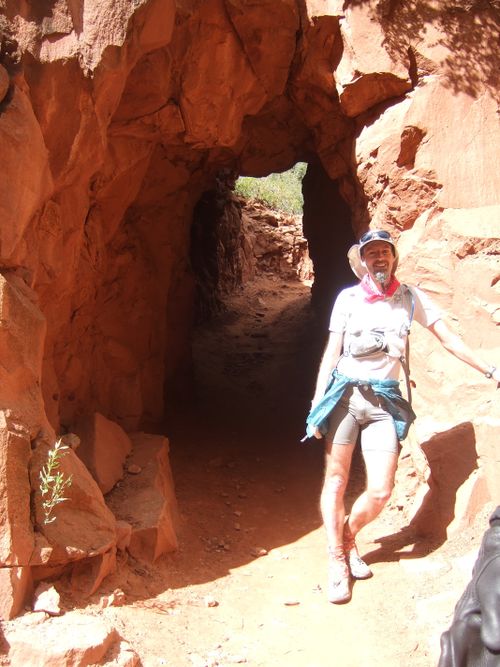 This is the Supai Tunnel; there is water just north of the tunnel, along with restrooms. This is the last water before the north rim, or it would be if there was water at the north rim! You need to carry enough water from here to get you to the north rim and back. A hydration pack is a necessity. I had a 70 oz pack and never ran out of water, though the temperature was unseasonably low. 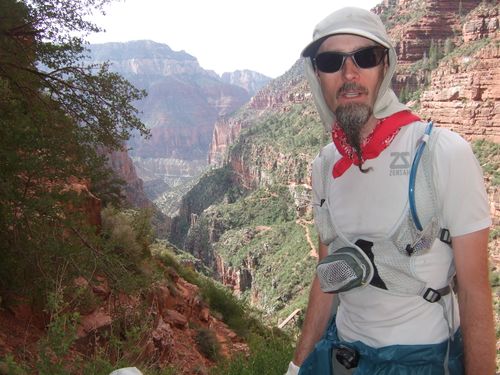 Looking back from close to the north rim. You can see the trail running along the canyon wall starting just by my right elbow. From here heading south, the path drops down to the bridge you can see near my right wrist, then climbs for a while before continuing its long decent to the Colorado River. The change in ascent/decent was very nice. By this time I could feel the effect of altitude, even though I had been at 6000+ ft for more than a week and felt fine running at Bryce Canyon which is 8000-9000 feet. 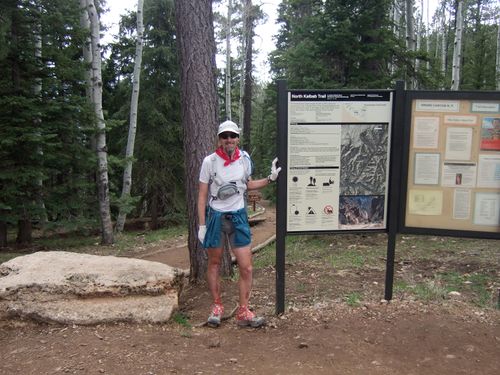 This is the trailhead on the North Rim. Unlike the South Rim, which has shops and hotels right at the Bright Angel Trailhead, the tourist facilities at the North Rim are another two miles away. There is this sign and a parking lot - that is it. Most importantly for a double crossing, there is no water here! The temperature at the north rim was cold. I started at the south rim at 3:15 and 30f, reached the Colorado at dawn with very pleasant temperatures (probably 50s). By the time I reached the north rim he had expected thing to warm up, but it was back down around freezing with some snow on the ground. The lack of air (~8000 ft) and the cold, combined with slight weariness caused me to quickly chill. I had hoped to get a cell phone signal here to let everyone know back at the south rim that I was okay and things were going well, but no such luck. I did get a signal further down; next time I may get a SPOT satellite tracking device ;} 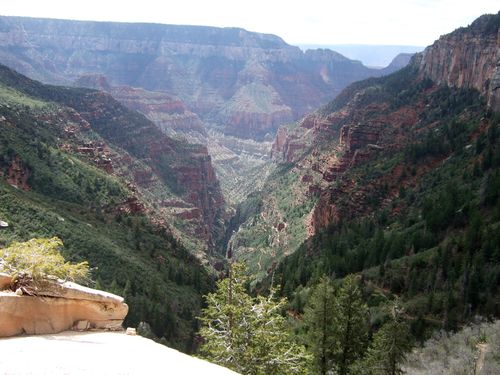 This is a view across the canyon to the South Rim, 25 miles away. How hard can it be? Well, seeing the return journey makes it a little tougher ;{ 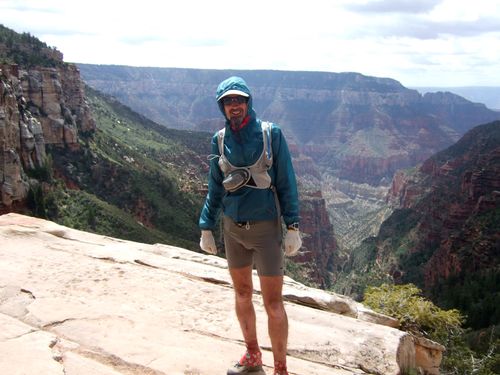 It was very cold at the North Rim, and much warmer down in the valley. I was very glad of the extra clothing - the ultralight (5 oz) waterproof was great. 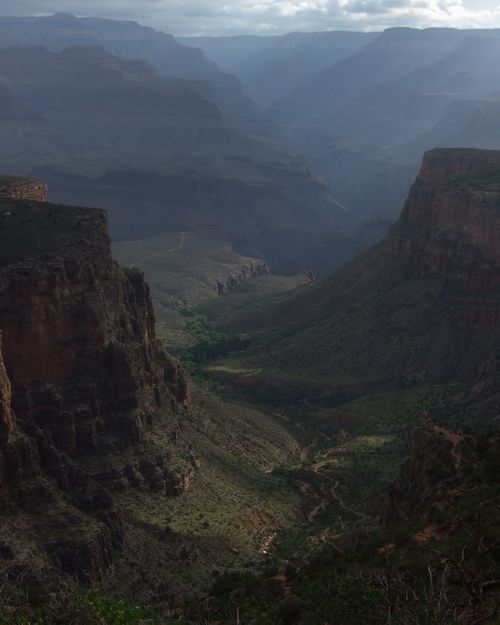 This is the view back down the bright angel trail towards the Colorado River. The Bright Angel trail has several water stops; at Indian Gardens Campground, 3 miles below the rim and 1.5 miles below the rim. These last two are fed by a pipe which often breaks - I would not attempt this run without those water stops working. (They are only on in summer, as are other water stops.) This part of the trail is in shade from about 4:00 onwards; it is well worth timing things to be out of the sun. Ascending this trail with the sun on you after 40 odd miles would not be wise. 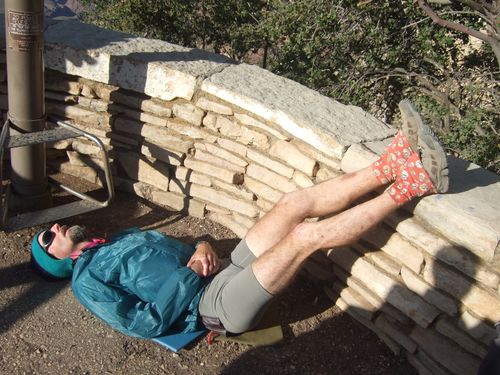 I arrived back at the South Rim at approx. 5:15 pm and took a bit of a rest. The double crossing took me about 14:15, which is very slow, but it was not a race. The 120 pictures taken accounted for some of the time, but there was also time just enjoying the trail. The self supported nature of the run also made me far more cautious than normal. This was also a family vacation, so the day before the run I had just finished four days of backpacking in the inner canyon, and I needed to be fit for day hiking the next day. By taking it easy, I bounced back nicely. The feet were up to improve blood pressure; hydration had gone well, but there was still a little dehydration. I did not stay long in this position due to hunger. The double crossing is self-supported; there is a shop at phantom ranch you can by a few snacks at on the way back (not open by the time you go by on the way out), but you have to carry nearly all your calories. When he was ready we went to the cafeteria for dinner - no camp food tonight! 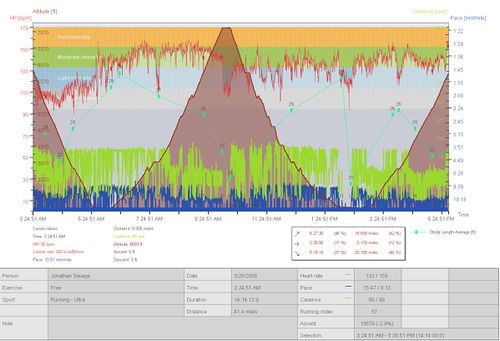 This is the record taken from my Polar RS800 HRM. You may need to view this at 'original' size to see the text. As you can see, there are just two hills ;}
Retrieved from "http://fellrnr.com/mediawiki/index.php?title=2008_Double_Crossing_of_the_Grand_Canyon&oldid=5977"
Category: