From Fellrnr.com, Running tips
Revision as of 17:50, 1 February 2017 by User:Fellrnr (User talk:Fellrnr | contribs) (Created page with "{{DISPLAYTITLE:The Cost of Running (Is driving cheaper than running?)}} File:Cost of Running.jpg Have you ever wondered how much running costs financial...")
(diff) ← Older revision | Latest revision (diff) | Newer revision → (diff)
Jump to: navigation, search 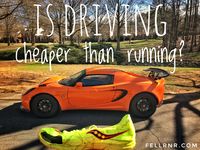