Impact of Heat on Marathon Performance

It's harder to run in the heat, something that is easy to forget when toeing the line at a marathon. If you've set goals based on cool weather training or performance without taking the heat into account, you will go out too fast and your overall time will suffer. You can't run as fast in the heat as the cool, but if you have a better idea what pace to set, you may be able to avoid a catastrophic result. There is good scientific evidence that Running in the Heat will slow you down, and there is a study[1] that quantifies the slowdown.

The study showed how finish time changes with temperature, and the results are shown in the following graph. 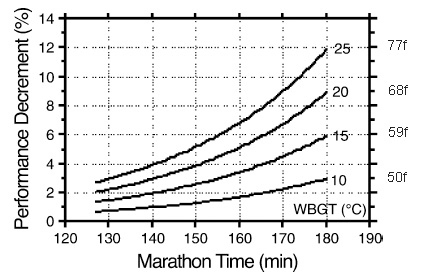 This graph works well for runners finishing the race at 3 hour pace or faster, but that excludes the majority of marathon runners. How can we extend this to slower runners?

The approach I've taken is to assume the decline is linear from the end points of each curve, as shown by the colored lines. This will give us a projection of performance decline and I’ve created a table at the end of this page based on this assumption. 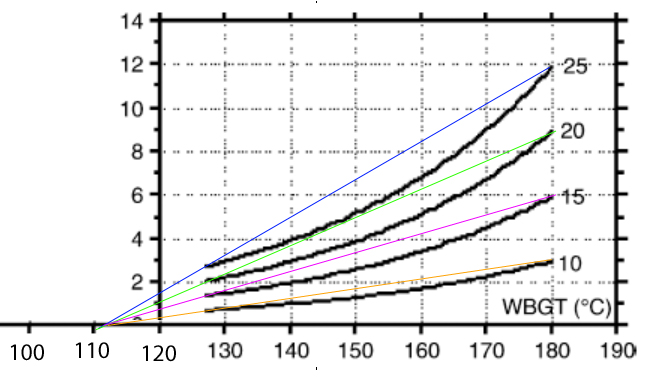 As noted in Running in the Heat, exercising in mild conditions of 60f/15c significantly impacts performance, but the perception is one of fatigue rather than overheating. When pacing marathons, I have consistently found that runners in mild conditions between 50f/10c and 70f/20c seem to be generally unaware of the heat stress and instead feel fatigued. It can be hard to convince these runners to shed excess clothing, but once they cool off, they can often partly recover. Running marathon+ distance training runs on a frequent basis, I have found a similar phenomenon if I don't shed clothing fast enough to compensate for rising temperatures. My perception is of being a comfortable temperature, but feeling fatigued, often to the point of being sleepy. Shedding clothing so that I feel slightly cool greatly reduces the sense of fatigue, and my pace picks up even though my perceived effort remains the same.

4 Your Mileage May Vary

There are a lot of flaws in this approach, which you should be aware of.

5 Usability of the data

Given all these problems, is this approach usable or useful? I believe there is value as long as you understand the limitations of the approach. If the charts below say you can run a 4:48 marathon based on your cool weather performance and the projected temperature, this does not mean you can run a 4:48 in practice. What it does provide is a sense of just how much you will need to slow down on a hot day, and how important weather is in your results. Hopefully this information will allow you to reset your goals and promote a flexible approach on race day.

One key note from this analysis is that weather will play a huge role in your results. If you are seeking a race to achieve a specific time goal, such as Boston Qualification, choosing a race that has a high probability of cool or cold weather becomes important. You are probably better off with a hillier course than warm weather for instance.

Use the 'heat index' or 'feels like' temperatures rather than raw thermometer readings in the table below. (The Perceived Temperature For Runners is quite different and should not be used here!) You can also get temperature adjustment via the VDOT Calculator.

The study looked at 140 marathon results from 6 races (Boston, New York, Twin Cities, Grandma's, Richmond, Hartford, and Vancouver). Only the first 300 finish times were used as races only started recording all finishers in the 1990s. This gives a pool of 42,000 finish times. The races were divided up into four groups The actual temperature measurement used is Wet Bulb Globe Temperature (WBGT) which is similar to ‘heat index’ given on weather forecasts, but WBGT includes the heat of the sun, which ‘heat index’ does not[2].