This has rapidly become one of my favorite running shoes. It has the soft cushioning that is like the best of the Hoka range, combined with zero drop and a nice wide toe box. It's remarkably flexible given its cushioning, with an outsole that works well on the road. Like the Hokas, the cushioning means the shoe works well on rocky trails as well. Like other Altra shoes, the tongue area is wider than most shoes, reducing the pressure on the top of your foot. The weight is similar to a Hoka, but somehow feels lighter than a Hoka when I'm running. Like the Hokas, the midsole thins at the front and back to create a rocker effect, and this is a little more noticeable than the Hokas. I felt this worked well, though I've talked to runners who have found the rocker a little disconcerting. You can see the difference in the slice through the two shoes above, with the Hoka tapering in front of the ball of the foot and the Olympus starting to taper much further back. 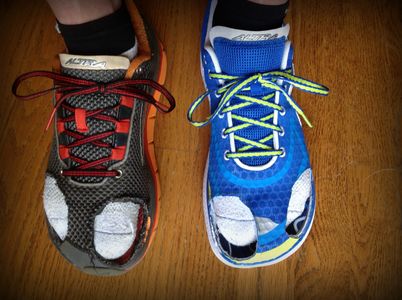 The Olympus and Paradigm are remarkably similar shoes, so it's easiest to talk about the differences.